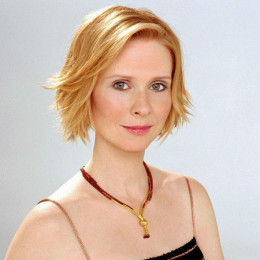 Cynthia Ellen Nixon is an actress widely popular for portraying the character of Miranda Hobbes in the HBO series Sex and the City. For her outstanding role, she received the 2004 Primetime Emmy Award and won a Tony Award for "The Rabbit Hole" for Best Leading Actress in a Play. She has earned a Grammy Award for Best Spoken Word Album in 2009 for An Inconvenient Truth.

Cynthia Nixon Married? Who's Her Partner/Spouse?

Cynthia Nixon, 53, is openly a bisexual and she has already been in a serious relationship with both men and women. Currently, the Manhattan, New York-born actress is married to a lesbian partner, Christine Marinoni, an education activist since 2012.

The couple's lavish wedding ceremony was held in New York City on 27 May 2012. Further, Nixon wore a custom-made pale green dress designed by Carolina Herrera. In 2011, the Democratic politician and her spouse Marinoni welcomed a son, Max Ellington.

According to Cynthia, she met her partner amid a 2002 gay rights rally. They kindled romance in 2004. Subsequently, they announced an engagement at a march for New York Marriage equality in April 2009. Two years later, they walked down the aisle in the presence of close friends and family members.

Prior to same-sex marriage legalization, Nixon and her family attended Congregation Beit Simchat Torah, an LGBT synagogue. She took a public stand supporting the issue and announced a fundraising event in support of Washington Referendum 74.

Previously, she was in a relationship with her school teacher, Danny Mozes. They lived as a boyfriend-girlfriend for almost 15 years. Cynthia dated Mozes in early 1988 and broke up in 2003 citing personal issues. This transgender celebrity has a son and a daughter from her estranged relationship. In June 2018, Nixon disclosed that one of her two children is transgender.

What is Cynthia Nixon's Net Worth?

Nixon has been serving as an advocate for LGBT rights in the United States, especially the right to same-sex marriage. She possesses an estimated net worth of $25 million.

Cynthia receives a salary of $5 to $10 million per annum from her career as an actress and advocate. She and Kristin David each earned $3 million from Sex and the City.

Other films and television credits include "Let it Ride", "The Babysitters", "ER", "Warm Springs", "House" and "The Big C".  She won Emmy for her appearance on "Law & Order: Special Victims Unit" in 2008. Soon after that, she achieved Grammy for being Best Spoken World Alumn for "An Inconvenient Truth".

Post a number of deductions, Nixon and her wife reported adjusting income of $619,799. Cynthia collects a huge payroll from the S Corp called "Fickle Mermaid" from which she drew $400,000 in income.

The Babysitters star, Cynthia Nixon underwent a breast cancer diagnosis in October 2006 amid a routine of mammography. She then decided not to go public with the illness cause it might hurt her career.

Nevertheless, in 2008, the LGBT activist opened up her battle with the disease in an interview with Good Morning America. Even more, Cynthia convinced the NBC head to broadcast her breast cancer special in a prime time show. She has now become an ambassador for Susan G. Komen for the Cure.

Cynthia Ellen Nixon aka Cynthia Nixon was born on April 9, 1966, in Manhattan, New York to Walter E. Nixon, Jr., a radio journalist and Anne Elizabeth Knoll, an actress. She was the only child of her parents.

As per Nixon, her father was unemployed and the mother was the household's main breadwinner. Cynthia is of German and English descent. Her grandparents were Walter E. Nixon, Sr., Etta Elizabeth Williams, Adolph Knoll, and Grace Truman McCormack.

The starlet was introduced to a theatre by her mother. She made her television debut at age 9 as one of the "impostors" pretending to be a junior horse riding champion. Cynthia became an actress through her years at Hunter College Elementary School. Nixon continued her job in order to pay her through Barnard College where she earned a degree in English Literature.

She is the first partner of Nixon, who is a education activist. They were dating since 2004.

She is the first child of Nixon, whom she gave birth at the age of 30.

He is the first son of Nixon, who was born safe and healthy.

He was born safe and sound. His images can be viewed on the internet easily.