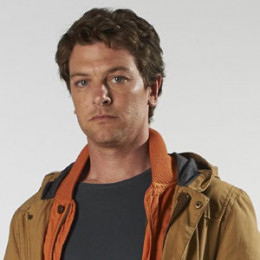 Being an actor, Spielman has won several awards and nominations including the Australian Film Institute Awards (AFI) now (AACTA: The Australian Academy of Cinema and Television Arts Awards). He was in a marital relationship with Australian actress, Yael Stone but the pair eventually divorced citing irreconcilable differences.

Dan Spielman was born in 1979 in Melbourne, Victoria, Australia. She belongs to white-Australia ethnicity/race and holds an Australian nationality.

Spielman graduated from the St Michael's Grammar School, St Kilda, Victoria in 1996. He then started working in theatre, eventually landing up on television and films without formal acting training.

Dan Spielman debuted with 1997 Australian police drama series, Blue Heelers as Zac Taylor, starring John Wood, Julie Nihill, Martin Sacks, and many others. The same year, he was cast as the main in Australian Television series, Raw FM, where he appeared for one season.

In 1998, Spielman worked in two television series, Wildside, and Blabbermouth & Stickybeak. He then appeared in short film, The Date as well as TV series, Queen Kat, Carmel & St. Jude and many more.

Between 2001 to 2017, Spielman made his appearances in the number of series, The Secret Life of Us, The Incredible Journey of Mary Bryant, Darwin's Brave New World, An Accidental Soldier, Sisters as well as movies, One Perfect Day, Tom White, The Hunter.

As per as sources, Dan Spielman’s net worth is estimated to be in six figures, but the amount is still under review. His movie, The Hunter succeed to earn $1,051,613 (Australia), $176,432 (United States) at the box office.

Swoosie Kurtz, one of the casts of the series, Sisters earns a salary of $10k-$20k per episode. So, we can assume that he possibly earns around the same amount.

The Sisters star, Dan Spielman is possibly single, but previously he was married to his co-star, actress Yael Stone and lived in New York City. Stone is an Australian actress, who has won two Sydney Theatre Awards.

Spielman and Yael Stone first met on the set of a play called "The Blind Giant Is Dancing”, and tied to knot in 2012, However, the former couple got divorced, after being together for two years. They don't have any children till date.

Here's a video of Daniel Spielman talking about his role in series, An Accidental Soldier.