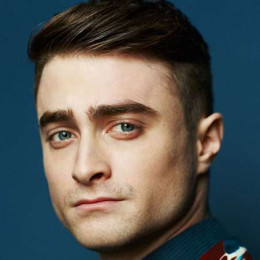 An English actor who is better known for starring as wizard-in-training Harry Potter in the landmark Harry Potter film franchise. Active in the industry for years, he has earned good net worth.

Daniel Radcliffe is not married yet but is in a relationship with his actress girlfriend, Erin Darke. They met when they were filming a very intimate scene in the 2013 movie, Kill Your Darlings.

Previously, Radcliffe was rumored to be dating Emma Watson.

Daniel Radcliffe holds the net worth of $110 million. He rose to fame after working in Harry Potter inspired by the book of J.K. Rowling.

Daniel Radcliffe was born on 23rd July 1999 in London. He is son to Alan George Radcliffe and Marcia Jeannine Gresham. ]

The star was just 5 years old when he developed his fascination in an acting career. Later in 199, he debuted in BBC One's televised 2 part adaptation of the novelist Charles Dickens popular novel "David Copperfield".

According to him, he was not so good at school. For his role in the Harry Potter series, he was awarded numerous awards including National Movie Award for Best Male Performance in 2007 and Multiple Teen Choice Awards and MTV Movie Awards. He has also starred in popular movies like Black, Kill Your Darlings and Horns. Currently, he is working as an ensemble cast of Shane Carruth's third film, "The Modern Ocean" where he is cast along with Anne Hathaway.