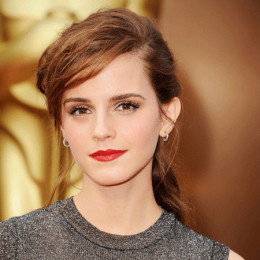 Emma Charlotte Duerre Watson is an actress who got recognition from her role as Hermione Granger in the Harry Potter film series is also a model and an activist. She is the recipient of British Artist of the Year, MTV Movie Award, Teen Choice Award, People's Choice Award, and Young Artist Award.

Emma was born on April 15, 1990, in Paris to parents Chris Watson and Jacqueline Luesby, both English lawyers. After the divorce of her parents, she moved to England and lived with her mother in Oxfordshire and on the weekends spending time with her dad who lived in London.

She attended Dragon School in Oxford with her brother. Watson was enthusiastic in acting from the age of six. She also took acting classes at Stagecoach Theatre Arts and studied singing, dancing and acting. Then she enrolled at Headington School. Not only in acting Emma was also good in studies and on GCSE school exam she scored eight A* and two A grades.

While still at school she got the role of Hermione Granger in the Harry Potter movie, based on the novel by J.K Rowling. This changed her life from a simple school going girl to an internationally recognized celebrity.

Emma busy with her acting career at the time couldn't complete her studies. From 2011- 2014 she divided her time between work and study. She earned a bachelor's degree in English literature from Brown University and Worcester College.

During school, she participated in school plays and did various performances in Stagecoach productions. Some of them are The Happy Prince and Arthur: The Young Years.

However, her life turned when she got the role of Hermione. Watson was discovered through her Oxford theater teacher. After eight auditions she was selected for the part. The first part HarryPotter and the Sorcerer's Stone was a big hit and after that several series of the movie was released over the years which were equally successful.

It opened many opportunities for Emma, and now she is one of the best in the industry. Some of her other feature films include The Bling Ring, The Perks of Being a WildFlower, Noah, This is the End and Regression.

Recently in 2017, she appeared in The Circle and Beauty and the Beast. For the latter movie, she even won MTV Movies and TV Award. Watson is also a recipient of Phoenix Film Critics Society Awards, National Movie Awards, three-time Teen Choice Awards, Young Artist Awards and much more.

Besides acting, she also has featured in magazines like Teen Vogue, Cosmopolitan, and People. Emma was one of the youngest stars to be featured on the cover of Teen Vogue. She was also the face of Burberry and Lancome. In 2009 Watson served as the creative advisor for the People Tree, a Fairtrade fashion brand and created spring line clothing, released in February 2010.

The gorgeous Emma is not married yet. But she dated William Mack, a tech entrepreneur. They started dating back in October 2015. The lovebirds are often spotted together. They seem to be very happy together.

Watson was once rumored to be dating the charming Prince Harry Windsor, but she later addressed the rumor via Twitter saying, "WORLD ♥ Remember that little talk we had about not believed everything written in the media?!"

Emma also was in a romantic relationship with Will Adamowicz. She and Will met in 2011 while studying at Oxford University. They lasted for two years and broke up in 2013. She also dated Jarry Barrymore, George Craig, Francis Boulle, Tom Felton.

The star also dated Glee actorChord Overstreet. The relationship did not last long and broke up soon. Moreover, in 2019, she is dating actor Tom Felton.

Watson is not only beautiful, but she also has a heart of gold. She is an activist and done many good deeds. She promoted education for girls and visited Bangladesh and Zambia. Emma was named as a UN Women Goodwill Ambassador in 2014. She helped launch the campaign HeForShe, which calls men to advocate gender equality.

Emma Watson from the Harry Potter series made around $60 million and also was offered a six-digit fee to become the face of Burberry. The series starred Daniel Radcliffe, Rupert Grint, and Maggie Smith among others.

As of 2017, this pretty lady has an estimated net worth of $80 million. She also ranks sixth in the 2017 list of Forbes' highest-paid actress.