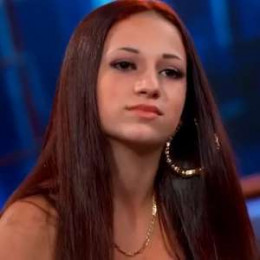 Danielle Bregoli is an American YouTube Star, who became the internet sensation after she appeared on Dr. Phil Show. She multiplied her stardom and become a millionaire before turning 20 after her phrase ‘Cash Me Outside Howbow Dah,' went viral on the internet and soon lots of memes flooded.

Danielle Bregoli is an American YouTube Star, who became the internet sensation after she appeared on Dr. Phil Show. She multiplied her stardom and become a millionaire before turning 20 after her phrase ‘Cash Me Outside Howbow Dah,' went viral on the internet and soon lots of memes flooded.

Danielle Bregoli was born Danielle Bregoli Peskowitz on March 26, 2003, in Boynton Beach, Florida. She is the daughter of Ira Peskowitz, a deputy in Palm Beach Florida and Barbara Ann. Her parents dated for a year and broke when Bregoli was an infant after which she was raised by her mother.

Danielle Bregoli first featured on the show called 'Dr. Phil' in September 2016, a show focused on the relationship between parents and their notorious, disobedient children. She got recognition as Cash Me Outside Girl. Based on the clips, her catchphrase was turned into a single, recorded by DJ Suede The Remix God. The song listed on the Billboard Hot 100 and Streaming Songs. Later, the song entered Hot R&B/Hip-Hop Songs charts on its March 4, 2017, edition.

However, Bregoli and her mother filed a lawsuit against three companies for "infringing her intellectual property rights" as her catchphrase was used without consent. She threatened to sue Walmart as well for using her phrase on t-shirts.

Danielle Bregoli is no known by a number of names on social media, including Bhad Bhabie(bad baby) and Slim Thugga. After her first appearance on 'Dr. Phil', Bregoli spent four and a half months at a school, and residential program for troubled teens called Turn-About Ranch.

She again re-appeared on the show, on February 10, 2017, but this time with her therapist and without the audiences.

She won a nomination for a 2017 MTV Movie & TV Awards in Trending category based on the catchphrase.

It ranked #77 on the Billboard Hot 100 making her the youngest debutant female rap artist to enter the music chart. The Atlantic Records approached her with a multi-album recording contract.

She released another single Hi Bitch on September 22, 2017, followed by Whachu Know along with the music video, which received over a million views in 24 hours.

Danielle Bregoli from her catchphrase has earned millions till now. She was even offered a million dollar recording deal with the Atlantic Records.

Further, she has released two songs along with the music video which earned a combined view of 95 million. Her YouTube channel Bhad Bhabie has around 2 million subscribers as well.

She also owns Porsche costing around $90,000 but does not have a driving permit yet.

Danielle Bregoli, 14, is rumored of dating NBA Young Boy, 17. Well, if Boy is her boyfriend their relationship would be illegal in the United States.

All the commotion started after Boy posted a picture with the Cash Me Outside Girl, in which she is standing in front of a piano and Boy is holding a pile of cash.

Bregoli then posted a similar photo on her Instagram, It was followed by a series of comments between the two. She is till to reach a legal age to be in an intimate relationship.