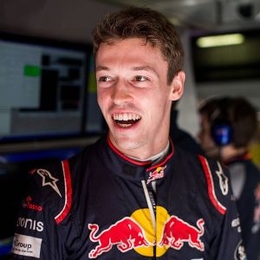 Daniil Kvyat is a Russian racing driver known for his quick driving with great resilience. He competed in Formula One with Toro Rosso, Red Bull, and Alpha Tauri throughout his career.

Who is Daniil Kvyat Dating?

In a short span of time, Daniil Kvyat has garnered a lot of fans with his resilience and quick driving skills. But, a lot of them are also wondering about the personal life of the handsome Russian racer. Well, let's find it out below.

In the past, Daniil had an intimate relationship with the Brazilian model, Kelly Piquet, whom she dated since August 2016. And, in January 2017, Kelly confirmed the pair's relationship with a black & white picture on her Instagram with a caption that read 'Love' in Russian. 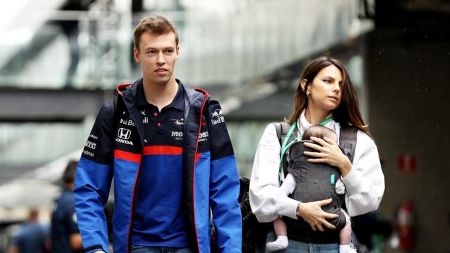 Likewise, Kvyat also shared one beautiful daughter named Penelope Kvyat, born in July 2017 with Kelly. But, his counterpart Max Verstappen came out unlucky for him. Max did not only take his Red Bull racing team seat in 2017 but is also dating his ex-girlfriend Kelly.

However, F1 fans alleged to Kelly Kvyat on Twitter that Kelly dating Max was the snakiest thing. Well, many thought Kelly dumped Daniil & replaced him with the uprising star, Max Verstappen with whom she shares an almost ten years age gap. 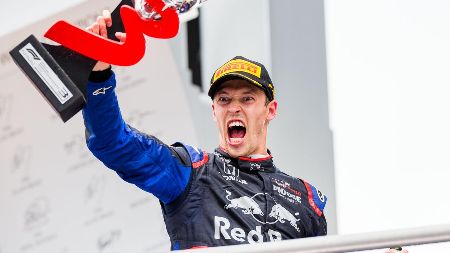 At present, Daniil Kvyat is reportedly single and isn't romantically linked with anyone. Well, it seems like 27 years old is more focused to bring his career back on track after major setbacks.

Danill Kvyat began his formula one career with Toro Rosso in the USA. Later in 2015, he was promoted to Red Bull and competed in Australian Grand Prix, 2014. The racer also faced two big collisions in 2015 during the competition.

Watch the video of Daniil Kvyat takes his Russian driving test below.

In the 2016 season, Daniil was demoted from Red Bull to Tororoso with a crash against Sebastian Vettel with poor performance. Afterward, his seat was replaced by Max Verstappen. In 2018, Daniil signed with Ferrari as a reserve driver. Later in 2019, Redbull called him back to the team. Because of his sluggish season, he dropped out again after the 2020 season.

As for 2021, Daniil is left out without a racing seat and is a reserve driver for Alpine F1 Team. Talking about his net worth, Daniil has summoned a whopping wealth of $5 million. Kvyat collected most of his fortune from his brand endorsement, salary, and bonuses. Currently, Daniil resides in his house in Monaco.

Penelope Kvyat is the daughter of Daniil Kvyat with her ex-girlfriend Kelly Piquet, born in July 2017.