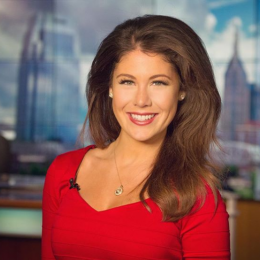 American meteorologist, Daphne Deloren is currently working as a meteorologist in WSMV. Deloren started her career from WVFS Tallahassee and later worked as an intern in different popular networks like CNN, NBC News, and WCTV among others. Apart from Deloren's professional life, she is married and is expecting a baby with her husband.

Daphne Deloren was born in California, U.S.A. Deloren is American by nationality and belongs to White ethnicity. In 2014, she earned a bachelor’s degree in meteorologist from Florida State University.

Deloren grew up around the hurricanes and was fascinated by the science behind natural disasters like the storm. She was interested in broadcasting and meteorologist since her childhood so pursued a career in the same field.

Daphne Deloren started her career as a meteorologist from WVFS Tallahassee- 89.7 FM in 2010. She served there for several months and shifted to NBC News as an intern for entertainment news. Later, she worked in several popular networks as an intern meteorologist including State Emergency Response Team (2012), CNN (2013) and WCTV (2013).

Deloren served as a team leader and a student meteorologist in 4FSU Weather and worked there for almost two and a half years. Leaving the network in 2014, she joined WNEM TV5-MY5 Meredith Corp as a weekend meteorologist and noon meteorologist.

As of now, she is working as a meteorologist in WSMV (an adult hits station) from 2016.

Daphne Deloren married her longtime boyfriend, Josh Matheny in July 2017. They dated for years and engaged on 25th June 2017 before tying the knot in a beautiful countryside view the same year.

Few months after their marriage, the pair announced the world that they were pregnant and expecting a baby. She announced on Facebook:

"Josh and I are overjoyed to share some very exciting news! We are expecting our first little blessing early next year. Thank you Lord, for this new beautiful season. #woahtothisyear
#bigbrotherNash #weatherassistant"

They even posted the sonography of the baby on their social media. The duo welcomed their baby boy named Noah in January 2018.

Deloren is good at photography, storytelling, and public speaking.

Daphne Deloren who currently resides in Nashville, Tennesse with her husband is making a decent income from her profession. Her net worth lies somewhere between $200,000-$500,000.

As per the record, the average salary of a meteorologist is $59,000. She also has a self-titled YouTube channel. According to the pictures posted by Deloren on her social media, she is fond of traveling.

In July 2017, Daphne Deloren married Josh Matheny after dating for years. The couple is currently expecting their first baby and is happy together.