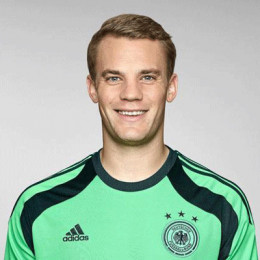 He is a German professional football player who is currently playing for the German club side Bayern Munich and in the German national football team as a goalkeeper wearing jersey number 1. He is very talented and is very skilfull in blocking the balls. He is described as a "sweeper-keeper" in the football arena. He has quick reflexes and responses to the ball. He began his youth career at Schalke in 1991 and made his debut from the same club. He had spent most of his years at the club.

Manuel is a married man, he ties a knot his long term girlfriend, Nina Weiss, in Austria. later he had a religious ceremony in Italy. The couple dated for more than a decade before tying the knot in May 2017.

His elder brother, Marcel is a football referee in the Verbandsliga. His childhood idol was former Schalke and German national goalkeeper, Jens Lehmann.

As of June 2017, Manuel Neuer’s net worth is $40 million dollars. In 2011-2012 Season Manuel signs a 5-year contract with Bayern Munich and was paid a whopping estimated $28 million, thus making him the 2nd most-expensive goalkeeper of all-time.

Despite that, in November 2011, he won €500,000 for charity in a celebrity edition of Wer wird Millionär? the German version of Who Wants to Be a Millionaire?

Manuel Peter Neuer was born on March 27, 1986, in Gelsenkirchen, West Germany. He holds a German nationality and belongs to the white ethnicity.

He is a German professional footballer who plays for Bundesliga club Bayern Munich and the Germany national team.

Neuer attended the Gesamtschule Berger Feld, like many other notable soccer players such as Mesut Ozil. He played football since his childhood days, Manuel got his first football at the age of 2.

He played the first game in 1991,  at a tender age of 5. He played in the youth system of Schalke and performed well beyond everybody’s expectations.

In 2005, Manuel made his senior professional debut, but couldn’t make his first appearance on the field in his first season. He got a chance to play in the second season though and performed well.

In the 2006-2007 Season, he made his Bundesliga debut with Schalke. In the 2007-08 season, Manuel started playing for his team in the UEFA Champions League wherein the knockout match against Porto.

In 2011, he announced that his contract with Schalke was approaching its end and he isn’t willing to extend it further, for which he received a lot of backlash from Schalke fans.

Manuel was selected for the 2016 Euro Cup and didn’t let any team score goals against Germany in all the matches of the group stage before Italy scored one and broke the streak.