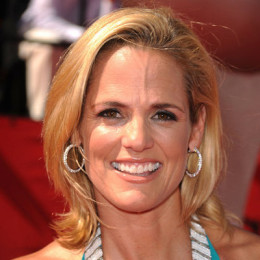 Dara Grace Torres in an American sports icon who has brought her national fame and succession in numbers of competitive events of swimming. Torres has bagged 12 Olympic medals and stands lone swimmer to participate in 1984, 1988, 1992, 2000 and 2008 Olympics. This swimming pool queen competed in 3 different events in 2008 Olympics and bagged silver medals in all three of them. Her father Edward Torres was a casino owner and she was brought up through fully facilitated childhood.

Dara Torres was born on April 15, 1967, in  Los Angeles, California to Edward Torres and Marylu Kauder. She is American and belongs to the Cuban-American ethnicity. Torres was raised in  Beverly Hills, California along with her five siblings.

Torres attends the Westlake School for Girls (now Harvard-Westlake School) where she competed for the school swim team through her sophomore year in high school.

Dara Torres has a daughter, Tessa Grace. This American iconic swimmer who has a stunning body even in her old age dated numbers of men in her life. She has been through numbers of marriages too.

She was married to Jeff Gowen early but they ended up with divorce. She married Itzhak Shasha in 2000 but couldn't find herself comfortable in this relationship too. Later she dated David Hoffman and she is happily leading her married life with him till the date.

Dara Torres married Jeff Gowen in the year 1992. He is sports producer by profession but they ended getting divorced.

Itzhak Shasha became her second husband. They married in the year 2000. Itzhak Shasha is and Israeli-born surgeon. They later divorced.

Tessa Grace Torres-Hoffman was born in 2006 to Dara Torres.