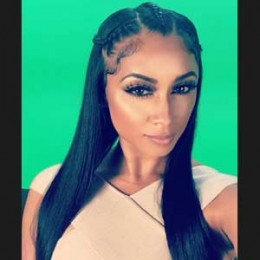 The stunning model, TV personality, actress, Darnell Nicole became popular from E! Television series WAGS. She is also a mother of a daughter, Carson Cree from her ex-husband, Reshad Monquez Jones, a football player. Besides acting, she also has her own clothing line. Darnell is recently single, independent and single mother and aims to set a benchmark in the industry. She has 190,000 followers on her Instagram account.

Darnell Nicole was born on 18th March 1985 in Lake Charles, Louisiana. Her ethnicity is African-American and is the citizen of United States. When she was young, her parents got divorced. She enrolled for piano classes, dance classes, and acting classes. She attended Clark Atlanta University and earned bachelor's' degree in English.

Darnell is involved various acting classes and commercials. Apart from that she also featured as a lead character in Kiss the Bridge alongside, Darren Henson and Persia White. She also did a role in Girlfriend and worked in various plays too. Nicole is also a writer.

Later in her career, she did many shows, collaboration with various companies and fashion brands. Moreover, Darnell also has her own website too.

The independent and cute model, Nicole was dating Reshad Jones, a footballer. The couple dated for a long time and on 5th April 2016, they finally got engaged. They already had a daughter named Carson Cree who was born on 13th September 2013. The couple stayed in a living relationship and did not get married.

In 2016 they separated, but the reason was not revealed. She didn't take the breakup very well and was left heartbroken. As of now Nicole is single and raising her daughter as a lone parent.

Darnell has an estimated net-worth of $250,000. Her source of income is the shows, films, and her clothing house too. As per her posts, she has traveled to many places and having parties too. Nicole's wardrobe seems awesome and expensive too.

Darnell Nicole and Reshad Monquez Jones were in living relation and got a baby girl named, Carson Cree in 2013.