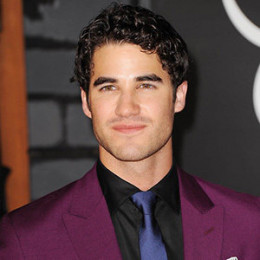 An American actor, singer, and songwriter, Darren Criss is Currently dating with Mia Swier. They have been dating since 2010. Criss is best known for his portrayal of Blaine Anderson on the Fox musical comedy-drama series "Glee". He is the son of Cerina and Charles William Criss. He made his professional stage debut at the age of ten as Cesario in 42nd Street Moon's production of Fanny. Criss received numerous awards for his performance and succeeds to earned good sum of net worth.

Darren Criss was born Darren Everett Criss on February 5, 1987, in San Francisco, California, U.S. He is the youngest child of Cerina and Charles William Criss, an investment banker and a patron of the arts.

He was raised along with his big brother, Charles "Chuck" Criss, he is a member of the band, Freelance Whales in San Francisco. Later his family moved to Honolulu, Hawaii where Criss worked at EastWest Bank as Chairman and CEO.

Criss developed an interest in music since his early days. At the age of 5, he started taking violin lesson and also learned to play guitar and the piano.

Besides music, he has a keen interest in performing arts. At the age of 10, Criss was accepted into the American Conservatory Theater. He appeared in theater classics like ‘The Music Man’ and ‘Diary of Anne Frank’.

In 2009, he grabbed his bachelor degree in Fine Arts from the University of Michigan with major in Theater Performance and minor in Musicology and Italian. He was also active in the university’s student-run theater program.

Darren Criss debuted in a stage performance at the age of ten in 42nd Street Moon’s production of the play ‘Fanny’ (1997) as Cesario. He then appeared in the musical named Do I Hear a Waltz (1998) and Babes in Arms (1999).

Later, he appeared in several American Conservatory Theater plays, including A Christmas Carol and A Midsummer Night’s Dream’. Criss co-founded a musical theater company ‘StarKid Productions’ along with his college friends. The play gained prominence for the musical comedy ‘A Very Potter Musical’, based on the famous Harry Potter novel by JK Rowling.

Darren Criss began his musical journey since his college days. In 2010, he released an EP entitled ‘Human’. It peaked at # 17 on the US Billboard Top Heatseekers Albums Chart. He also performed in solo tours in several states of US, Canada, and France.

Criss started his television career with a five-episode arc playing the character of Josh Burton on Eastwick in 2009. He portrayed the character of Blaine Anderson in the TV series ‘Glee’, Criss has been featured in several musical performances. He has worked in many of the Glee albums as well.

In January 2012, Criss debuted on Broadway with How to Succeed in Business Without Really Trying. He received critical acclamation for his acting. In 2015, he worked in the play Hedwig and the Angry Inch as Hedwig.

Criss is well- known for his work in the American musical comedy-drama TV series, Glee in a lead role. His performance was appreciated by audience and critics as well he received and won him multiple awards.

His first significant role on the big screen was comedy film ‘Girl Most Likely’ released in 2012. The film was directed by Shari Springer Berman and Robert Pulcini. The movie received negative reviews.

In 2017, he starred in the third season of the popular American anthology series American Crime Story. The series has earned critical acclaim so far and has also won several awards.

He has also appeared on the magazine covers of Billboard, Entertainment Weekly, Out, Playbill, TV Guide and much more.

Darren Criss has received several awards in his career so far. In 2011, he earned  ‘Dorian Award’ and the ‘Teen Choice Award’ for his role in the movie, Glee.

He also composed the theme song for Glee and Criss won the ‘Hollywood Music in Media Award’ in 2015. The song earned him an Emmy and Grammy nomination as well.

Darren Criss is in a romantic relationship with his longtime girlfriend, Mia Swier. The duo is together since 2001.

Once there was a rumor of Criss as Homosexual because he portrayed a gay character in Glee but after the announcement of his girlfriend, all rumors collapsed.

Criss is an active supporter of LGBT rights. He has also performed at several charity events.

Darren Criss has an estimated net worth of $3.5 million and has noted salary of $1 million.