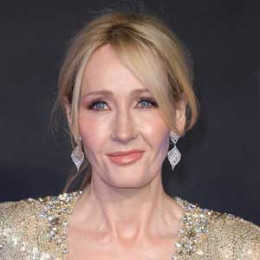 Joanne Rowling is a famous British author who wrote the book Harry Potter fantasy series based on Wizarding World. The book gained huge attention and sold more than 400 million copies all over the world. Later, movies series was released based on the book which gained popularity among all generation of people. Besides Harry Potter series, she has written books like The Casual Vacancy (2012), The Silkworm (2014), The Cuckoo’s Calling (2013), Career of Evil (2015).

Joanne Rowling is the daughter of Peter James Rowling, a Rolls-Royce aircraft engineer, and Anne Rowling, a science technician who was born on 31st July 1965, Yate, Gloucestershire, England, UK.

She spent her childhood with a younger sister, Dianne in the village Winterbourne. She joined St Michel’s Primary School. The headmaster of the school was the inspiration for the character Albus Dumbledore in Harry Potter.

Later, she moved to Church Cottage in Gloucestershire village and joined Wyedean School and College where her mother worked in the science department.

In 1982, she applied for Oxford University but got rejected. Then she studied Bachelor of Arts in French and Classics at the University of Exeter. She also worked for Amnesty International as a researcher and bilingual secretary.

J.K. Rowling started her career as a writer. In the year 1995, she completed the manuscript for Harry Potter and the Philosopher’s Stone. A year later the book was released in Bloomsbury, a publication house in London. The book was one of the successful selling books of the year.

Also, she won the first award, a Nestle Smarties Book Prize in 1996. In February 1997, she won the British Book Award for children’s Book of the Year.

She completed the rest of the three series of book and released simultaneously in the following years. The four of the books have consecutively set the records as the fastest-selling books in the history.

Later the books were purchased by Warner Bros. for a seven-figure sum in 1998. Alfonso Cuaron directed a movie based on the book. The first film released on 16th November 2001. The movie's cast included Daniel Radcliffe, Emma Watson and Rupert Grint as lead characters.

After receiving huge success as a writer, she published four books namely Casual Vacancy, The Cuckoo’s Calling, The Silkworm, and Career of Evil. However, the books did not sell like the fantasy book Harry Potter.

Moreover, she wrote a book “Fantastic Beast and Where to Find Them.”  A movie based on the book released on 8th November 2016. The film starred Eddie Redmayne, Katherine Waterston, Colin Farrell.

Rowling was in a love relationship with Jorge Arantes, a Portuguese television journalist. The couple first met in a bar for the first time. Later, they got married on 16th October 1992. They became parents to a baby girl, Jessica Isabel Rowling Arantes, on 27th July 1993.

The pair filed for a divorce on 17th November 1993, and it was finalized in August 1994. Due to the separation, Rowling faced clinical depression and even contemplated suicide.

In the year 2001, she married Neil Murray, a Scottish doctor in a private ceremony at her home. This couple is blessed with two children: son David Gordon Rowling Murray and daughter Mackenzie Jean Rowling Murray. Currently, JK is living with her family in Scotland.

In 2016, Joanne was listed in 197th richest person in the UK which was published by Sunday Times Rich List in 2016. According to the sources, she has an estimated net worth of $2 billion.

Moreover, she has purchased a lavish 19th-century house, Kiliechassie House, situated on the bank of the River Tay, Perth.

Joanne Rowling married Jorge Arantes, a Portugues television journalist on 16th October 1992. The couple welcomed their first child, a daughter Jessica Isabel Rowling Arantes in the year 1993. They divorced in August 1994. After the split, Rowling suffered from clinical depression and even attempted suicide.