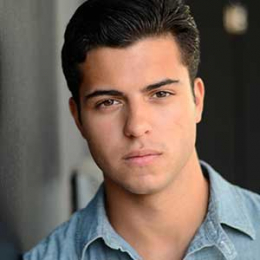 Started his career as a child actor, David Castro is now a grown-up handsome Hollywood hunk. He is best known for portraying the role of Raphael Santiago on the Freeform fantasy series Shadowhunters.

David Castro wins many hearts with his versatile acting but is there anyone who won his heart? Let's find out,

Castro is in a romantic relationship with his longtime girlfriend, Paige Chandler. The couple is together since March 2011 and recently, they celebrated their seven years-long relationship without any sign of separation.

The duo perfectly matches each-other and never leaves a room to express their love for one another. Moreover, looking through, David Instagram, maximum of his posts is with his girlfriend.

David Castro is an actor and his primary source of income is from his acting appearances in the movies and TV series. He surely collects a hefty sum from his profession.

The actor is one of the main cast of supernatural drama television series, Shadowhunters which also stars Katherine McNamara, Dominic Sherwood, Alberto Rosende and others. All of them has a net worth of $3 million.

The cutest puppy dog eyes around!