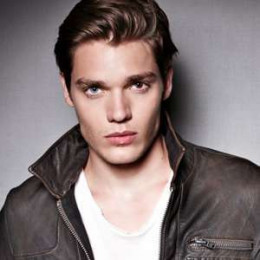 Dominic Sherwood is a model and actor. He is popular from the satirical horror movie called Vampire Academy, he has a role as a Christian Ozera . Dominic has two different colored eyes,because of heterochromia. He has worked in television series "Shadowhunters". He had played 'Not Fade Away' directed by David Chase.

There is a rumor that he has been dating with Sarah Hyland, she is an actress of Tv series called Modern Family in the year of 2015. Hyland spotted getting close and comfortable with her boyfriend. Both of them are comfortable with each other and enjoying their life.