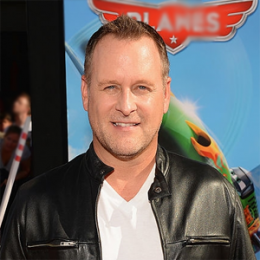 Dave Coulier is an American actor, voice actor, stand-up comedian, impressionist, and television host. He is best known for portraying the character of Joey Gladstone on the ABC sitcom Full House.

Dave Coulier was born David Alan Coulier on September 21, 1959, in St. Clair Shores, Michigan. His father was a foreman and mother was an interior decorator. He was the third child of his parents.

Regarding his nationality, he is an American and is of Mixed ethnicity half Jewish and half English. His zodiac sign is Virgo.

Coulier graduated in 1977 from Notre Dame High School which is an all-boys Catholic School in Harper Woods, Michigan. He was interested in acting since his early days; he used to do mimicry of his teachers and principal.

After graduation, he enrolled at the University of Michigan for a short time. However, he didn't acquire a degree to pursue his career in comedy and acting.

In 1977, Dave Coulier went to Los Angeles to live his dream. In 1986, he was cast as a player for Saturday Night Live, but soon he left the show. He got his first voice-over work at the Hanna Barbera Studios, and afterward he lent his voice to many animation shows like; Extreme Ghostbusters, The Real Ghostbusters, Scooby and Scrappy-Doo, The Jetsons, Teen Titans and many more.

Ok, we were @bobsaget ’s house. Look at all those tans! #tbt #fullhouse #cutitout

From 1984-86, Coulier served as the host in comedy series Out of Control on Nickelodeon. His career took off when he was cast in the  ABC’s sitcom Full House in 1987 for the character of Joey Gladstone. In 1997, he appeared in CBS’s, George and Leo and also hosted the shows like; America’s Funniest People and Opportunity Knocks.

Coulier appeared in several movies and series including; The Thirteenth Year (1999), The Even Stevens Movie (2003),  Shredderman Rules (2007), How I Met Your Mother, America’s Funniest People. He also participated in reality shows such as; The Surreal Life (2004) and Skating With Celebrities (2006).

Despite involving in entertainment fraternity, he is equally active in social work too. In 2000, he co-founded a children’s entertainment company, F3 Entertainment.

Dave Coulier is happily married to Melissa Bring, a photographer, and producer. The duo exchanged vows on  July 2, 2014, in Montana. The couple was in nine years relationship before tying the knot.

Previously, he was in a marital relationship with Jayne Modean, an actress best known for Full House. The duo shares a son, Luc born in 1992. He also had an affair with Alanis Morissette, a singer.

He is a private pilot and flies a Beechcraft B35. He supports AOPA foundation to promote safe flying, and he is also an avid ice hockey fan, participates in celebrity games.

Dave Coulier has succeeded to earn a decent amount of net worth around $4 million from his acting career, while some online sources have mentioned the figure, no official confirmation has come about it. Despite that, he owns a private jet, Beechcraft B35 which cost more than $150,000.

His movies earned more than millions on box office and marked as a blockbuster whereas his series receive highest TRP's. He charged millions for his appearance on films and series which made him one of the highest paid actors.

Recently, he listed his Encino house at $1.959 million. He is living a lavishing life with his wife in New York.

Jayne Modean is an actress who is best known for her work in the famous sitcom, Full House.

Melissa Bring is a producer and photographer. She is in a relationship with Coulier since 2005 and married in 2014.

Luc Coulier is the only son of Dave Coulier. He was his first son from his first marriage.