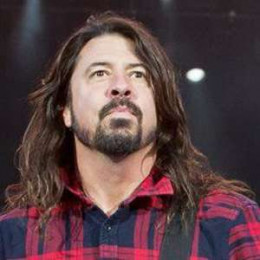 Dave Grohl is a musician, singer-songwriter, guitarist, drummer as well as a record producer and film director. He is well known as the former drummer for the Grunge band and Nirvana. At the age of seven, his parents, Virginia Jean and James Harper Grohl divorced and was raised by his mother. He started his musical career at the age of fifteen as a guitarist.

He then joined “Bruce Springsteen and Zac Brown” on stage at the concert for Valor in Washington. Dave Grohl has been married twice and his first wife was Jeniffer Youngblood. He married Youngblood in 1994 and ended their relation in 1997. Grohl married his second wife, Jordyn Blum in 2003 after dating a year or two. The couple has three children, all daughter Violet Maye Grohl, Ophelia Grohl, and Harper Willow Grohl.

He has been married twice. He was previously married to a photographer Jennifer Youngblood. But both couples were separated.

This versatile actor is currently married to producer Jordyn Blum, with whom he share three daughters.

She is the first daughter of his.She was born April 15.She has two younger sisters.

She is the second daughter of him.She was born on April 17.she has one elder sister and one younger sister.

She is the third daughter of them.she was born on August1. She has two elder sisters.