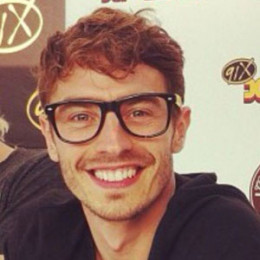 Danish/American singer, David Boyd is the frontman of the alternative rock band, New Politics. Before rising to stardom, he worked in various commercials as a background dancer. He also worked as a street performer at the initial phase of his career. Boyd is yet to be married but is in a relationship with his actress girlfriend, Christian Serratos since 2014. Currently, the couple parents a daughter together.

David Boyd was born David Sebastian Boyd on 6th February 1988 in Copenhagen, Denmark. Boyd is Aquarius. He holds both American and Danish nationality and belongs to Mixed ethnicity. His Swedish/Danish mother and American father raised him in Copenhagen.

David Boyd, at the initial phase of his career, worked as a break-dancer and a street performer. He participated in several competitions and won few of it also winning an award. He used to work as a background dancer and appeared in several commercials. He also danced in a post-apocalyptic interpretation of The Jungle Book by Rudyard Kipling.

After much struggle, he along with his friend, Soren Hansen (now guitarist and backing vocalist) formed a band, New Politics in 2009 in Denmark. The band signed a deal with RCA Records after gaining popularity in Denmark. The band added Louis Vecchio, who now plays drums.

In 2010, the band performed at SXSW festivals after completing a nationwide tour. The same year, they released two albums, New Politics, and Vikings. The band also released music videos for Yeah Yeah Yeah, CIA, One of Us, Dignity, and Color Green among others.

David Boyd has an estimated net worth not less than a six digit figure but the exact amount is not made public.

Boyd is earning a good amount from his band, New Politics. He bought a new car for Christmas, 2017 which he revealed by posting a picture on his Instagram account.

David Boyd is yet to be married. Boyd has been dating his girlfriend, Christian Serratos since 2014. His girlfriend is American actress popularly known for her role in AMC’s The Walking Dead TV series. She is also an animal activist who loves animals and supports campaigns against animal killing.

The couple is living together for a long time. Back in 2017, the couple announced about expecting a child by posting a picture on the Instagram with a caption,

‘’ I'm gonna be a daddy!!! This is my beautiful spectacular one of a kind most amazing love of my life.’’

Serratos also flaunted her baby bump on the red carpet. In May 2017, the couple welcomed their adorable daughter whose name is still not revealed.

Below, the video of an interview of New Politics:

David Boyd and his girlfriend, Christian Serratos welcomed their first child (daughter) in May 2017. The name of the child is still not revealed.