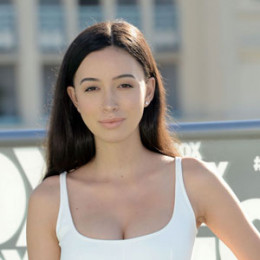 The Walking Dead fame star, Christian Serratos is an American actress popularly known for her character as Rosita Espinosa. She began her modeling career at the age of 7 and active in the film industry since 2004. Serratos won "Young Supporting Actress" award for her role as Angela Weber in Twilight. She is married to singer David Boyd, and the duo is proud parents of a daughter.

Christian Serratos was born Christian Marie Serratos on September 21, 1990, in Pasadena, California, United States. She was raised in Burbank, California. Her mother is a jewelry designer and marketing agent at ACSPR whereas her father is a set construction worker.

She signed with Ford Modeling Agency when she was 7, and after a year she moved to acting and commercial work. She also learned Tae Kwon Do, different dance forms, and Hapkido.

Christian Serratos debuted in acting with a 2004 Nickelodeon series, Ned's Declassified School Survival Guide, where she played the role of Suzie Crabgrass. The series was commercially successful and lasted up to season 3.

In 2008, Serratos made her big screen debut from Twilight, a movie adaptation of the eponymous novel, as Angela Weber. She won the "Young Supporting Actress" award in the category of Best Performance in a Feature Film for her breakthrough performance. Later, she reprised the role of  Angela Weber in other Twilight franchise.

In 2011, Christian Serratos featured in the music video for The Black Keys' Howlin For You. Since 2014, she is the regular cast member of The Walking Dead, where she has plays Rosita Espinosa, a tough, focused, and a capable survivor.

Some of her other screen credit includes 96 Minutes, Pop Star, Flight 7500, 7th Heaven, American Horror Story: Murder House, and The Secret Life of the American Teenager among others.

Christian Serratos has earned millions from movies and TV series, some online sources claim her net worth is in millions, but no official confirmation has come about it.

Serratos has four poodles which cost around $2k to $3k. She has worked in many hit movies like,

Christian Serratos married her boyfriend of three years, David Boyd in March 2017. Boyd is the lead singer of rock band, New Politics. They started dating in 2014.

The couple is blessed with a daughter, Wolfie Boyd, born in May 2017. Serratos currently resides in Los Angeles along with her husband and daughter. She is an avid animal lover and has four poodles, Johnny Cash, Gigi, Uffie, Gorilla.

Here's a video of Christian Serratos on The Talking Dead.

Christian Serratos married her boyfriend, David Boyd in March 2017. Boyd is the lead singer of rock band, New Politics. The duo fell for each other and started dating in 2014.

Christian Serratos and her husband David Boyd blessed with a daughter, Wolfie Boyd, born in May 2017. She currently resides in Los Angeles along with her husband and daughter.