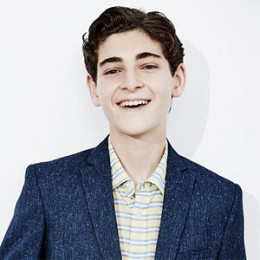 Teen sensation, David Mazouz is an American actor. He is popularly recognized for his character as a young Bruce Wayne in Fox series, Gotham, the show is based on the superhero Batman. Besides, his brilliant acting in Fox's TV series Touch got him the nomination of Young Artist Award. In 2016, he appeared in the horror movie, The Darkness, as a lead character.

David Albert Mazouz was born on February 19, 2001, in Los Angeles, California. He holds an American nationality and belongs to the white ethnicity. His mother, Rachel is a psychotherapist, and father, Michael Mazouz is a physician.

He grew up in a Sephardic Jews family along with his sister, Rebecca. He attended the  Shalhevet High School which is a Modern Orthodox Jewish school since 2015. His passion towards acting provided him an opportunity to feature in the music video, promoting his school.

Gotham fame actor, Mazouz began his career through commercials at the age of 8 along with actor, Kiefer Sutherland. In 2010, he made acting debut with TV film, Amish Grace. It was followed by his film debut with Coming & Going where he portrayed the character of Timmy.

In 2013, Mazouz got the pivotal role in TV series Touch as mute Jacob "Jake" Bohm. His performance was well praised by audiences and critics which made him highly popular. Even, he won a nomination for Young Artist Award.

He has worked on several movies and series and delivers an outstanding performance such as;  Mike & Molly, The Office, Criminal Minds, Private Practice. Since 2014, he is a part of  Fox's TV series Gotham as younger Bruce Wayne along with Ben McKenzie, Donal Logue, and Zabryna Guevara. His performance was highly appraised by the fans as well as the critics. In 2016, he appeared in the horror movies  The Darkness and  Incarnate.

David Mazouz is rumored to dating his Gotham co-star, Camren Bicondova who portrays the role of Selina Kyle, a future Catwoman.

However, both the actors haven't confirmed their relationship. Well, the fans are curious to know if Bicondova is really his girlfriend. Once in an interview, Bicondova said,

"David's really fun. He's my buddy on and off screen. He's an amazing actor and I've learned a lot from him, as much as the other cast members. He's a cool dude."

Mazouz has a huge female fan following on social sites and likes to keep them up to date with his life.

David Mazouz known as one of the prominent young actors has earned impressive net worth from short span of his career. He has maintained the net worth of $0.7 million in 2017.