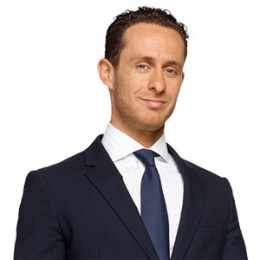 David Parnes is a renown Real estate agent most known for starring on the Bravo reality TV series Million Dollar Listing Los Angeles. He is a married man and living blissfully with his wife, Adrain Abnosi.

David Parnes was born on March 21, 1982, in London, England. He attended the University of Manchester and earned his degree in Economics and Politics.

Parnes began his career working at the hedge fund. He then joined a private portfolio of real estate assets in Europe. Soon he became the co-founder of a premium real estate service company.

In 2014 he along with his partner James Harris sold major commercial buildings. Both of them are currently working at Mauricio Umansky’s  company Bond Street Partners. Today David is a specialized high-end residential real estate and investment properties agent in Beverly Hills.

His fame rose to the prominent level after appearing in the Bravo TV series Million Dollar Listing Los Angeles along with Josh Altman and Josh Flagg.

Parnes has accomplished a lot throughout his career. He listed as one of the Hollywood’s Top 25 Real Estate Agents by The Hollywood Reporter in 2014, 2015 and 2016. He was also listed on the Wall St. Journal Real Trends list for 2015 and 2016.

Parnes is a married man. He took the vow with the love of his life Adrain Abnosi in 2017. Abnosi is an interior designer. The ceremony was held lavishly in France in the presence of family and friends.

The duo started dating in 2013 and after two years of romance Parnes purposed. The couple shares unconditional love and is living a contented married life together.

As one of the well recognized real estate agent and the reality TV star, David Parnes earns a lucrative amount from his career. He holds the staggering net worth of $16 million.

Parnes has sold over $165 million worth of real estate along with his partner James Harris. The partners sold the Hustler Store on Sunset Boulevard, Los Angeles in $ 18.5 million.

Adrain Abnosi is an interior designer by profession. Besides that, she is the loving wife of real estate agent David Parnes.