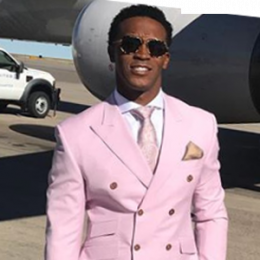 Demaryius Antwon Thomas is an American football player who was named All-Atlantic Coast Conference and All-America during his year as a freshman. He played as a wide receiver in his career and is well known for his credits for the Denver Broncos of the National Football League. Currently, Thomas is playing with Denver Bronco and is listed as the longest-tenured Denver Bronco.

Demaryius Thomas was born on 25 December 1987, in Montrose, Georgia, U.S. He is Afro-American in ethnicity and holds American nationality. He is the son born to Bobby Thomas and Katina Smith.

Thomas joined West Laurens High School, based in Dexter, Georgia. During the time, Thomas was a three-sport star in basketball, track, and football.

Thomas has also played as a wide receiver for the club Raider football team, under the head coach, Andrew Slome. In 2004, as a junior, Thomas recorded 32 receptions for 330 yards and three touchdowns.

Demaryius Thomas attended the Georgia Institute of Technology and majored in management. He sat out the 2006 season as a redshirt freshman. Due to his hard play, Thomas was listed as freshman All-Atlantic Coast Conference first team and a freshman All-America honorable mention, by The Sporting News.

In the year 2009, Thomas had an amazing season with eight touchdowns and 46 receptions for 1,154 yards. The following year was his redshirt junior at Georgia Tech. This led him to achieve 1st team All-ACC honors.

In 2010, Demaryius Thomas was drafted by the Denver Broncos in the first round in the 2010 NFL Draft with the 22nd overall selection. On 31st July 2010, the Broncos signed a five-year contract worth $12.5 million with a guaranteed amount of $9.35 million.

For over 97 yards, Thomas had eight receptions and scored one touchdown in his NFL debut against the Seattle Seahawks. Thomas came into limelight when he defeated All-Pro cornerback most catches in a rookie franchise history.

Demaryius completed his season 2010 playing in ten games, with 22 receptions for 283 yards and two touchdowns.

On 10 Feb 2011, it was announced that Demaryius Thomas had torn Achilles tendon during his work out. It was expected to miss a majority, if not the entirety, of the 2011 season.

Demaryius Thomas made his 2011 season debut on 23 October 2011, against Miami Dolphins. He also collaborated with quarterback Tim Tebow for the Bronco's first score of the game. He ended the season 2011 with 32 receptions for 551 yards and four touchdowns.

Thomas was recovering from his surgery to remove pins in left pinkie when quarterback Peyton Manning signed with the Broncos during the 2012 season. He set his regular season career highs in both yards and catches at New England on 7th October 2012.

Thomas tied his career with high catches in a game against Cleveland Browns and Carolina Panthers. Whereas, he registered one touchdown and 3 catches for thirty-seven yards.

At the beginning of the 2013 season, Thomas had five catches for 161 yards and two touchdowns in 1st Week victory over Baltimore Ravens. Thomas was also listed as AFC Offensive Player of the Week honors for the first time in his career with the Broncos' Week 10 victory over San Diego Chargers.

Thomas made his other credits to the Broncos historic season on offense. He also defeated Manning's 55th touchdown, which set an NFL record for the most touchdowns thrown by a quarterback in a single season.

In 2013, Thomas was also voted as the Pro Bowl. He was listed to the Associated Press All-Pro team for the first time in his career.

On an average, Thomas recorded 9.33 receptions and 102 yards each game during the 2013 and 2014 season, including the Super Bowl. He also had another Super Bowl record with 13 receptions for 118 yards and a touchdown. The Broncos was defeated by 43-8 in the game against the Seattle Seahawks.

On 5th October 2014, during the game against Arizona Cardinals, Thomas scored eight receptions for 226 receiving yards. He had a victory over the old franchise record for receiving yards in a single game held by Shannon Sharpe.

On 3rd March 2015, Denver Broncos placed the franchise tag ($12.823 million) on Demaryius Thomas. As per the report by ESPN's Jeff Legwold, Demaryius Thomas cites himself as one of the fine receivers in the NFL.

On 15 July, Thomas signed a contract worth $70 million with 5-years extension with the Broncos, just hours before the deadline for franchise players.

Thomas grew up with his aunt and uncle, as his mother and grandmother were arrested. His uncle gave him a nickname, 'Bay Bay' in reference to the bad kids from the movie, Bebe's Kids.

However, Thomas' mother was released at midnight on November 11-12, 2015. His mother's sentence was reduced by President Barack Obama. Obama reduced her grandmother's sentence on August 2, 2016.

Some online sources have reported that Thomas had a relationship with an American wardrobe stylist, Surina. His girlfriend, Surina has shared a picture of her birthday together with him on her Instagram account. However, the relationship between the couple has not been confirmed yet.

Thomas has shared few pictures with his family on his Instagram account. Currently, he might be in a relationship or single, as he has not confirmed his relationship status.

In 2010, a woman reported Denver police suspecting she was given drug and raped after attending at a party Thomas attended, in the company of his teammate from Broncos, Perrish Cox.

After a DNA test, it was proved she was carrying Cox's child. Thomas was a witness and said that Cox spoke to him before the incident, saying he was going to sleep with the girl. The girl even offered Thomas to sleep with her instead. However, he denied and left the party soon after the discussion.

Later, when Thomas was questioned about the conversation, he stated that according to Cox's erratic behavior and the speech he didn't believe Cox's words, and was serious.

The woman filed a suit against both Cox and Thomas, suing them, for battery, among other things, and conspiracy and negligence. The blame against Thomas has been removed.

Demaryius Thomas earns a huge amount of money from his football career. Thomas generates, $10 million annually from his playing career.

Thomas signed a $70 million contract of 5-years extension with the Broncos. The contract included an $11 million signing, $6.5 million roster bonus and $43.5 million guaranteed.

Thomas owns a house in Englewood. Thomas bought the house for $3.1 million in 2010. Currently, he lives in the house with his uncle, aunt, parents, and his girlfriend. He has the net worth of $9.5 million.