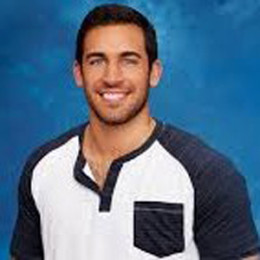 Derek Peth is a reality TV star whose fame rose to prominence after his appearance in the popular show The Bachelorette and Bachelor in Paradise. He met his fiance in BIP and even got engaged in the show.

Derek Peth was born in 1987 in Waverly, Iowa. He was born to father Dick Peth, the Wartburg basketball coach and mother, Maria. He grew up along with his sister Rachel.

Derek is a commercial banker serving at the Wall Street. He gained the name and fame after appearing on the reality TV show The Bachelorette and Bachelor in Paradise. He entered the show on its 4th season. Unwillingly, he was sent home on week six of the show.

The handsome television personality Peth is deeply in love with his co-star and current fiancee Taylor Nolan. They even exchanged their rings in one of the episodes of BIP.

The duo first met on the 4th season of the  Bachelor in Paradise. It took no time for them to appear as a couple in reality TV series. Unexpectedly, he purposed Taylor while the show was still going on. They soon became the talk of the town. The couple seems to have a strong affection towards each other.

Talking about Derek's hobbies, he enjoys going on adventures such as hiking and surfing. He is also quite fond of singing. He also spends his leisure time singing and playing the guitar. He is a fitness freak and often works out.

As a banker plus the Television personality Peth certainly earns the substantial amount from his career. His net worth is possibly more than six figures.