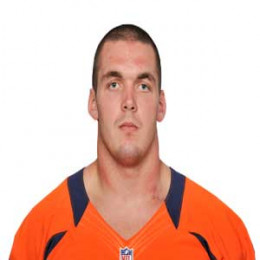 Derek Wolfe is an American football defensive end for the Denver Broncos of the National Football League. He played college football at the University of Cincinnati. He was selected 36th overall by the Broncos in the 2012 NFL Draft. He has recently tied the knot with his long-term girlfriend, Abigail.

Derek Wolfe is an American football player who plays defensive end for the Denver Broncos of the National Football League(NFL), was born on February 24, 1990, in Lisbon, Ohio, near the state line with Pennsylvania. His parents had separated before he was born.

Wolfe was raised by his single mother until she remarried when he was three months old, but they got divorced, and Derek moved to live with his stepfather. After his step-father had remarried, he stayed with his friends.

On November 29, Wolfe fell sick on the bus ride to the airport during their Kansas City Chief's matchup. Without Derek, the Broncos reached Super Bowl XLVIII, and they lost with Seattle Seahawks.

The year 2015 was a good career year for Wolfe as he made a comeback from his four-year suspension and established himself as one of the best players in the game. It ultimately led him to be the AFC Defensive player of the week.

On January 15, 2016, Derek signed a four-year expansion with Broncos. He also won Super Bowl 50 with the Broncos after they defeated the Carolina Panthers.

The American football player who plays defensive end for the Denver Broncos, Derek Wolfe is a married man. He recently exchanged vows with his beautiful girlfriend Abigail Burros on 26th February 2017 in a chilly outdoor ceremony at the Four5 seasons in Vail Colo.

Wolfe announced his engagement in May 2016 via Instagram and the engagement was held on May 20, 2017, in the presence of his family and friends.

However, there are no rumors about his past affairs. The new husband and wife are living a happy life together.

Derek Wolf has earned a decent amount of salary through his game. As of 2017, his net worth is estimated to be around $4 million.