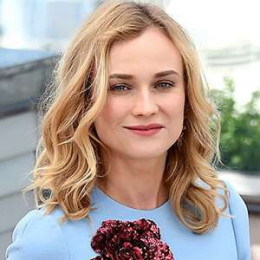 Diane Kruger is a German-American actress and former fashion model. She is the daughter of computer specialist Hans-Heinrich Heidkrüger and Maria-Theresa, a bank employee. She has one younger brother, Stefan. Diane was brought up Roman Catholic into a family and attended Catholic school.

As a child, Kruger wanted to become a ballerina and successfully auditioned for the Royal Ballet School in London but her ballet career ended after she had an accident. She then went to Paris and modeled for a various brands such as Christian Dior, Louis Vuitton and more. Kruger gradually stopped modeling after deciding to pursue a career in a citing.

She made her film debut in 2002, opposite Dennis Hopper and Christopher Lambert in The Piano Player, a TV film by Jean-Pierre Roux. Her first major acting role was the same year when she starred in her then husband's directorial début Mon Idole.

Talking about Diane personal life, she was married once and was in a relationship which recently ended. Diane was married to French actor/director Guillaume Canet. The couple started dating from 1999 and tied a knot on September 1, 2001. Diane and Canet have also acted together in Joyeux Noël. However, their relation couldn’t last long and they divorced in 2006. According to Kruger, the reason for their failure in marriage was their career which kept them in a different part of the world.

After her divorce, Diane started dating actor Joshua Jackson in 2006 and their relationship ended in 2016. There is no information about her children.

Diane was married to French actor/director Guillaume Canet. The couple started dating from 1999 and tied a knot on September 1, 2001.