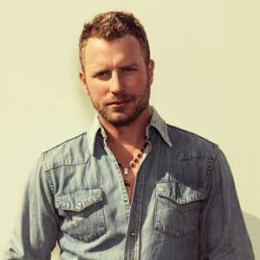 Dierks Bentley is a famous American actor and a lyricist widely recognized from his song What Was I Thinkin? which ranked no.1 on the Billboard Country Songs chart. Bentley was invited to be a member of the Grand Ole Opry and received the Country Music Association Horizon Award. Dierks is a married man. He is married to Cassidy Black, and together the pair has three children, two are daughter's Evelyn Day Bentley and Jordan Catherine Bentley and son Knox Bentley.

Frederick Dierks Bentley(birth name: Dierks Bentley) was born on November 20, 1975, in Phoenix, Arizona, U.S. He was raised by his father Leon Fife Bentley and mother, Catherine Childs. He received his middle name Dierks from his great grandmother's surname. He holds American nationality and belongs to white ethnicity.

The talented singer, Bentley attended Culver Academics from Lawrenceville School and graduated from the University of Vermont.

CMT Award winner, Dierks was inspired by his father to begin his musical career. In his starting phase, Bentley first worked at Nashville Network and played at local parties and bars. Soon after he released his blockbuster hit self-titled album, Dierks Bentley. In 2005 released his second album Modern Day Drifter which was certified platinum.

In 2009, Bentley released his another hit album Feel that Fire and his musical styles were compared to the country legends like Waylon Jennings and Merle Haggard. He continued to thrive his musical success with another album titled Up on the Ridge.

In 2014, Bentley released Riser, which was praised by all his fans and critics and the album was perhaps his most melancholy and contemplative work of his career.

He has mixed the elements of modern country, classic country, bluegrass, and rock, maintaining a distinct identity which consistently made him the most popular icon of American music industry. Currently, Bentley is onWhat The Hell Tour.

Dierks is married to his longtime girlfriend Cassidy Black. The pair tied the knot in 2005. Both the couple are happily living together along with their three kids.

They have been married for thirteen years with no signs of getting a divorce. They seem to be living a pleasant life.

Bentley has a jaw-dropping net worth around $32million. He has a license to fly a plane and owns his own Cirrus SR22.

Dierks is married to his longtime girlfriend Cassidy Black. The pair tied the knot in 2005 in Mexico.

Evelyn Day Bentley (nicknamed "Evie") is the first child of Bentley and Cassidy born on October 4, 2008.

Jordan Catherine Bentley was born December 25, 2010, and is the second daughter of the pair.