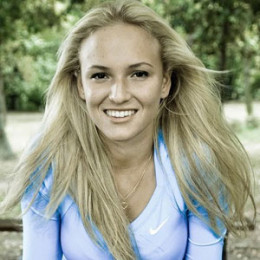 Winner of two singles on the WTA tour Donna Vekic is a professional tennis player. She made her mark on the sports field at the young age of 16. Besides, she has won five singles and one doubles title on the ITF circuit. Vekic is currently dating tennis player Stan Wawrinka. Both being players, they are a good match for each other.

Donna Vekic was born on 28 June 1996. She hails from Croatia. She had a keen interest in sports and began playing tennis when she was only six years old.

Vekic is the member of the Croatian Fed Cup team. She began her professional career as a player in 2012 Tashkent Open and she made it to WTA Tour final in the tournament. Being the youngest player in six years to make it all up to the WTA final, she drew quite an attention. However, she lost the match in a straight set to Irina-Camelia Begu.

She also participated in 2013 Australia Open and defeated Andrea Hlavackova in the first round. She lost to Caroline Wozniacki, World number 1 in the 2nd round of the match.

Defeating Marta Sirotkina and Valeria Savinykh she qualified for the main draw in the 2013 Sony Open Tennis. She lost to Elena Vesnina in the match. The same year she became the winner of the 50k tournament in Istanbul, Turkey defeating Elizaveta Kulichkova in the final.

In 2014, Donna made a wild card entry at the BPN Paribas Open in Indian Wells. The same year she won her first WTA title at Malaysia open final. She defeated world number 10 Dominika Cibulkova at that time. In 2015, she reached the third round in French Open losing to Ana Ivanovic. She also won the 2017 Nottingham Open in the United Kingdom. She is currently ranked 127 in the world.

The talented player Vekic is in a romantic relationship with her boyfriend, a tennis player Stan Wawrinka. Stan is a winner of Two Grand Slam Titles. He is almost eleven years older than Donna but their love for each other wasn't bound with the age. However, the duo has well managed to keep their private life as far as they can from the media.

Donna is a well-accomplished player. She earns a lucrative amount of salary from her career. Even though the factual information regarding her net worth has not been disclosed yet but her two WTA title wins must have surely boosted her worth. Also, she has won five singles and a double title in the ITF circuit, adding more to her worth.