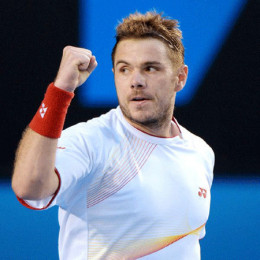 A Swiss professional tennis player Stan Wawrinka who is popular as the winner of 2014 Australian Open and the 2015 French Open. He is the son to Wolfram and Isabelle Wawrinka. When he turned 15 years old he dropped out of school and focused full-time on tennis. Actually he started his career playing in international junior events when he was just 14 years old and during that event he won the 2003 French Open Junior championships. He is popularly known for his powerful one-handed backhand, volley shot and dominant service game. He also brought gold medal for home country in men's doubles event at the 2008 Summer Olympics.

Exploring his personal life he is already tied in knot with love of his life who professionally is a Swiss television presenter and former fashion mode Ilham Vuilloud. Together they were blessed with one baby girl Alexia on 12 February 2010.

According to his wife he separated from his family for few years in order to dedicate himself in tennis. But later the couple reconciled. And again after some year of reconciliation he again posted the news regarding his separation with his wife in his Facebook account.

Hey @andymurray if you don’t want any fight with your kids at home I can send you this one also ...!!

But they haven't filed divorce yet. Till now there has been no rumor or report of any kind of affair of him with anyone.

The couple reportedly reconciled but they announced divorce on 19 April 2015. According to his wife, he repeatedly lied to her.

After the divorce, he started dating WTA player Donna Vekic.

As per Celebrity net worth, his net worth is around $16 million and according to the Richest, he has $12.5 million.

Stan Wawrinka was born on 28 March 1985 in Lausanne, Switzerland.

She is a Swiss television presenter, anchor and former fashion model. Together they are parents of one daughter. Currently they live separately and are in verge of getting divorced.

She is very beautiful and gorgeous. She is the only daughter of the family.