The Adventure of Dr. Buckeye Bottoms star Dr. Buckeye Bottoms dedicated years in caring animals. He attended door to door for animal treatment in his mobile van on the reality TV show. The show is going on with its second season on National Geographic. Traveling miles with his pet dog Kevin and delivering life-saving treatments and practice is only his aim.

Being the Hawaii-based mobile veterinarian, Bottoms is basically focused on keeping the animals of Hawaii fit and healthy. He travels with his pet dog Kevin and delivers life-saving treatment and practice. 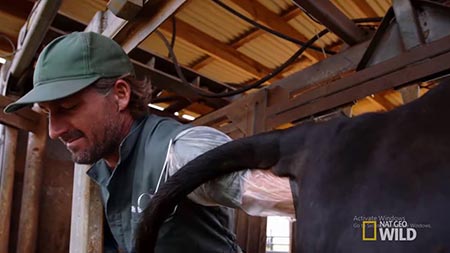 Apart from his busy schedule, his personal life is suppressed somewhere in between. He's never spotted dating a girlfriend and not confirmed his relationship status till date.

As he's not active on social media platforms, it's been a tough task to drag information on his affair and dating.

He definitely earned a huge sum starring on the reality show 'The Adventures of Dr. Buckeye Buttoms' on National Geographic Channel. People came to know about Bottoms and his mobile clinic from the same show.

The first season of the show aired on TV in 2017 and it's going on with its second season. He's seen caring and treating a large group of animals including dogs, cows, pigs, bull, Pygmy goats, and alpaca.

The very famous Dr. Buckeye Bottoms was born on 25 January 1977 in Santa Barbara, California to Timothy Bottoms and Alicia Cory. His parents separated with an official divorce in 1978 when he was just 1 year of age.

Besides, he completed schooling in California and later received a Bachelor of Science degree from California Polytechnic State University.

Sources reported that he is closely related with his family members and his step-mother is rather so supporting of his works.