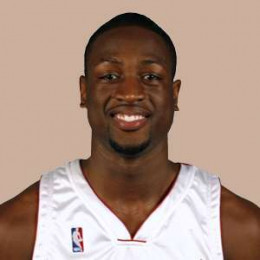 Dwyane Wade is an American professional basketball player for the Chicago Bulls of the National Basketball Association, with the help of which he added millions of dollars to his wealth and build real estate empire.

Dwyane Wade married and divorced twice in his life with different women. At age 38 he is a father to four kids. So, who is he currently dating or living with?

Wade, the NBA star is living a blissful marital relationship with the love of his life. He began dating actress Gabrielle Union in 2009. After kindling romance for four years, the lovebirds took their relationship to the next level. They exchanged vows on August 30, 2014, in Miami.

Prior to throwing the bouquet in the presence of close friends and family members, the pair engaged in December 2013. Before tying a knot, Wade and Union split up at some point due to career demands however they reconciled later.

Dwyane and Gabriel welcomed their daughter via surrogacy on November 7, 2018. Many people might not know that Gabriel has had nine miscarriages and still she is trying to conceive. On February 19, 2020, Wade's 12 -year-old daughter came out as transgender and changed her name into Zaya.

Like Dwyane, Union also had past-She was married to Chris Howard from May 2001 to 2006. They didn't have any kids.

The 6 ft 4 in tall star's first marriage was with high school sweetheart, Siohvaughn Funches in 2002. After living together for eight years he divorced Funches in 2010 followed by an acrimonious court battle. The father to four kids was granted sole custody of their kids.

Soon after that, Wade and his longtime friend Aja Metoyer gave birth to a son, Xavier Zechariah Wade (born November 10, 2013).  Wade was granted sole custody of his two sons with Funches, named Zaire Blessing Dwyane Wade, he was born on February 4, 2002, and Zion Malachi Airamis Wade was born on May 29, 2007.

How Much Is Dwyane Wade's Net Worth?

Dwayne Wade possesses an estimated net worth of $120 million. The pro basketball player bags a salary of $20 million per season. Since the athlete entered NBA he led the US team to a Gold Medal in Beijing in 2008.

On February 21, 2020, it's revealed the Miami heat will celebrate the 16-year career of Dwyane Wade in a three-day-long celebration. The 38-year-old us three-time NBA champion and 13-time NBA All-star.

Wade will be the firth former Heat star to have his jersey (No.3) retired by the team, joining the likes of Chris Bash and Shaquille O'Neal. During an interview with People on Wednesday, Dwyane credited his success and growth to Gabrielle, his spouse of six years.

He adds, Gabrielle, is her own boss and has her own career. She has her own bank account and so on. According to Wade, simple things like going to lunch and watching movies all day at home are the keys to having a healthy marriage.

Dwyane Wade was born as Dwyane Tyrone wade Jr, to JoLinda and Dwyane Wade Sr. in Chicago, Illinois. He had a keen interest in sports from an early age and considers Michael Jordan as his idol. Wade attended Harold L. Richards High School in Oak Lawn. Wade chose to play college basketball for Tom Crean at Marquette University in Milwaukee, Wisconsin.

He married to Siohvaughn Funches in 2002 and divorced in 2010.The couple has two children. There is no more information about his wife in social sites.

Wade began dating actress Gabrielle Union in 2009 and married on August 30, 2014.The couple does not have child.

His first son named Zaire Blessing Dwyane Wade ,he was born on February 4, 2002.

Dwyane Wade and ex-wife Siovaughn Funches son, Zion Malachi Airamis Wade was born on May 29, 2007. Zion came out as transgender on 23 February 2020 and changed his name as Zaya.

Dwyane Wade and his wife of six years, Gabriele gave birth to their only child, a daughter, Kaavia James Union Wade on November 7, 2018. She is now one year and three months old.