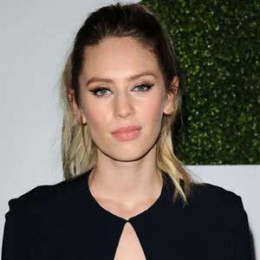 Dylan Penn is an American model plus actress known for her performance in Condemned, Elvis & Nixon and California Dreams. She is the daughter of actor Sean Penn and actress Robin Wright.Penn is not married yet and doesn't have a boyfriend either. Currently, the young actress is leading a single life.

Dylan Penn was born as Dylan Frances Penn, on April 13, 1991, in Los Angeles, California, USA. She is the daughter of an Academy Award winner, actor/filmmaker Sean Penn and a Golden Globe Award winner, actress/director Robin Wright.

She grew up in Ross in Marin Country, California along with her younger brother Hopper Jack. Her parents divorced in the year 2010.

Penn completed her high school from Marin Academy and enrolled at the University of Southern California. But she dropped out from the University after one semester. She then spent her time living in New York City.

Dylan began her career as a pizza delivery girl, waitress and freelance screenplay editor in the beginning. She even worked as a restaurant hostess and an intern at an advertising agency.

Penn made her modeling debut in 2013 for Gap followed by GQ, W, and Elle. She posed for photographer Tony Duran in the seventh issue of the erotica and fine arts magazine treats! in 2014. She was listed in annual Hot 100 list and 99 Most Desirable Women by Maxim and AskMen.com the same year.

Besides modeling, she made her appearance in music video Chains and a short film Rock Roll Ride. She featured on the cover of L’Officiel and Asos as well.

Dylan eventually landed a role in the horror movie Condemned followed by Elvis & Nixon featuring Kevin Spacey. In 2015, Penn was seen in independent films such as GenRX and Unfiltered.

Dylan was rumored to be dating an American superstar Robert Pattinson, but due to lack of factual information about their relationship, it was assumed a false story.

Later Penn made her relationship with an American actor as well as model Steven R. McQueen public in 2013. But they didn't last as girlfriend and boyfriend and ended their romance in 2014.

As of now, she is single and has given more time to her career.