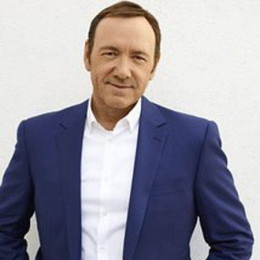 Kevin Spacey Fowler or only Kevin Spacey is an American actor, film director, producer, screenwriter, and singer. Kevin started his career as a stage actor during the 1980s before obtaining supporting roles in film and television. Spacey is born to Kathleen Ann, a secretary, and Thomas Geoffrey Fowler, a technical writer and data consultant. He has two older siblings: a sister, Julie and a brother Randy. He has English, Swedish and Welsh Ancestry. In 2013, Spacey won the lead role in original Netflix series named House of Card.

One of the legendary actors of Hollywood, Kevin Spacey started his acting career from the theatre plays. Spacey worked in several movies and TV series from where he has been nominated for several awards and won some of them including Academy Awards.

Kevin Spacey was born Kevin Spacey Fowler on 26th July 1959 in South Orange, New Jersey under the birth sign Leo. Spacey is American as per nationality and as far as his ethnicity is concerned, he is White.

Space is the son of Kathleen Ann, a secretary and Thomas Geoffrey Fowler, a technical writer. His parents raised him with his siblings, an older brother, Rany Fowler, a limousine driver and a sister Julie Ann Fowler Keir. When Spacey was four, he along with his family moved to Southern California.

Spacey attended Northridge Military Academy and Canoga Park High School. In 1977, he graduated from Chatsworth High School in Chatsworth, California. While studying in Chatsworth, he starred in school's senior production of The Sound of Music.

Before attending the Juilliard School in New York City, Spacey tried to build his career as a comedian.

Initially, Kevin Spacey started his acting in theater. In 1981, Spacey worked as a messenger in William Shakespeare's historical play, Henry IV, Part 1. Some of her other plays include Ghosts, The Seagull, Ricard II, and Richard III.

His breakthrough came in 1995 in a neo-noir mystery film, The Usual Suspects where he worked with Stephen Baldwin, Gabriel Byrne, and Benicio del Toro. He won Academy Award for his role in the film. He also won another Academy Award for his role in 1999's drama film, American Beauty. The movie starred Annette Being, Thora Birch, and Allison Janney.

Some of his other movies include Pay It Forward, K-PAX, The Shipping News, Austin Powers in Goldmember, Edison, 21, and Inseparable among others. As of 2018, he appeared in James Cox's biographical crime drama film, Billionaire Boys Club.

The famous actor made his TV debut in 1987 as a detective in an episode of The Equalizer. He then worked on several TV series and TV movies, however, is famous for his role in Netflix's TV series, House of Cards. He portrayed the role of a Democrat, Francis K. Underwood. He shared the screen with Robin Wright, Kate Mara, and Michael Kelly.

His performance was highly appreciated. Moreover, he has been also nominated for several awards and won some of them as well.

Kevin Spacey has been nominated for several awards and won some of them as well. Here is the list of his won awards:

Some of his other nominated awards include British Academy Film Awards, Golden Globe Awards, Primetime Emmy Awards, and Critics' Choice Television Awards among others.

According to Celebrity Net Worth, Kevin Spacey has an estimated net worth of $100 million whereas, his net worth is estimated to be $80 million as per The Richest. He worked in several movies with high box office collection, some of them are:

Spacey earned $500k per episode which made his salary to be $6.5 million from House of Cards.

Besides, he owned a house in Los Angeles which he sold for $11 million in 2017. He has a collection of luxury cars including

Spacey is involved in several charity works. He created his own foundation, The Kevin Spacey Foundation which helps to encourage young people in performing arts.

When it comes to his personal life, Kevin Spacey seems to maintain a very low profile and does not want people to know about much of him. Due to his romance with action and the absence of his visible partner resulted in a misunderstanding that he was gay. But he clarified that the rumor was true. He announced that he is gay via Twitter,

In 1999, it was reported that he dated a script supervisor, Dianne Dreyer. Besides, he was alleged of sexual misconduct. In 2017, Anthony Rapp alleged him of sexual misconduct. Later, may other came forward with the similar abuse including Heather Unruh, Ari Behn, and Tony Montana among others.

Also Read: Kevin Spacey Who Came Out As Gay In 2017 Has Been Accused Of Sexual Assault By More Than Fifteen Men-Details Here!!

Check out the facts about Kevin Spacey:

A lawsuit was filed against Spacey in September 2018 at Los Angeles Superior Court.  As per the claim, he sexually assaulted an unnamed masseur at a house in Malibu in October 2016.

He uploaded a YouTube video on 24th December 2018 named "Let Me Be Frank" on his YouTube channel in he denied all the sexual misconduct allegations while in character as Frank Underwood.

Some famous actors criticized and ridiculed his video via Twitter including Ellen Barkin, Jon Favreau, Rob Lowe, and Patricia Arquette.