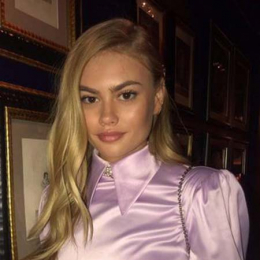 British model, Ella Ross is famous for modeling for popular brands like 'Missguided', 'Boohoo', and 'ASOS'. She came to limelight after her linked up rumors with Keeping Up with Kardashians star Scott Disick gets hyped. She is also a member of World's Leading Modeling Agency named WILHELMINA.

Ella Ross is possibly single as of now. The model is out of any relationships and seems focused on her career. It looks like the model is patiently waiting for the love of her life.

Ella was previously dating the famous model George Bates. The duo used to share a good bond and was open about their relationships. What's more, they even used to share their pictures together going in many places and vacations. Despite there unconditional love, the duo is rumored to be separated as they do not share any photos together in their respective media sites.

The model was also rumored for dating the Made in Chelsea star Jamie Laing. Besides, there is no proper confirmation about the duo's relationship. Similarly, she was also rumored for dating the Keeping Up With Kardashians star Scott Disick. The duo was spotted in many places and some people even say they were really dating one another. Further, the pair casually met for weeks in 2017 including in places like TAOin West Hollywood and The Peppermint Club in Los Angeles.

Ross is out of any media controversies and seems concerned about her modeling career. Additionally, she is an active social media user and often shares posts regarding her personal and professional life.

What is the Net Worth of Ella Ross? Know about her Earnings, Salary

Ella in her career worked in many modeling campaigns. Some of her famous work includes collaborating with brands like Missguided and Boohoo. More to that, she also modeled for the brand ASOS for several projects.

Ella Ross was born on 2 February 1996 in London, England under the Aquarius birth sign. She holds British nationality. Despite these things, she prefers to keep her personal life private and shares less about her early life.

Ross is one of the famous models who is also a member of World's Leading Modeling Agency named WILHELMINA. What's more, she stands at a decent height at the age of 23 years with a pair of brown eyes and blond hair.