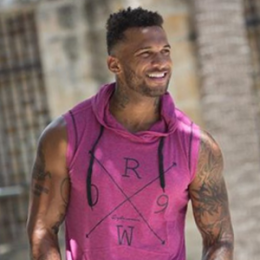 British ex-military and security operator, David McIntosh turned to a TV personality and a fitness model. He has also appeared in several music videos and reality shows. He served as a Royal Marines commando and was a Gladiator on the Sky 1's television series, Gladiators.

David McIntosh was born on 10th December 1985 in England under the birth sign Sagittarius. He is American and belongs to mixed ethnicity. His father is a Jamaican and mother is British. His parents raised him in Greater Manchester, England.

David McIntosh appeared in the TV series, Gladiators which was aired on Sky1 in 2008. The show was hosted by Ian Wright and Kristy Gallacher. The winner earned $60,000 as a cash prize in the show. Following the show, he served in security transportation on a badger culling operation.

In 2014, McIntosh appeared in the fitness magazine, Muscle & Fitness. Later, he appeared in the music videos like Walk It Out by Jennifer Hudson (ex-girlfriend of David Otunga) and Anaconda by Nicki Minaj.

In the same year, he entered the reality show, Celebrity Big Brother and became the first to be evicted from the house. He joined the celebrity dating show on the E! channel named, Famously Single 2 in 2017. He later appeared in the [email protected] Ancient Rome-themed TV show, Bromans.

David McIntosh was in a relationship with Rachel Christine, British model, and an athlete currently working in Love Island. The couple also shared a son together named Logan Phoenix McIntosh. The relationship did not last long and broke up eventually.

In March 2014, McIntosh engaged to British model and actress, Kelly Brook. They split after staying in the relationship and again reconciled. In November 2014, after an on-off relationship, they permanently separated.

After their split up, McIntosh demanded to compensate him for his gifts but Brook denied his demand. In 2015 McIntosh was claimed to bully her. He denied the allegations. He also revealed that he was not attracted towards her.

McIntosh finally revealed that he was married to Australian beauty, Juliet Bakos. He also passed a statement in which he said,

‘’ Yeah, I was married to Juliet. [We were married for] a year. We were together for two. [We split up] about five for six months before I filmed the show.’’

After dating numbers of ladies in 2017, he passed a statement,

‘’I can’t stop cheating on women. When I get into a relationship it is all about being faithful 100 percent, but what are you going to do when you're partying and you're drunk and you've got a plethora of delicious beautiful women coming on to you? You think you are not going to get caught. You are a man at the end of the day. The girls gravitate to me. I can't help it I was born like this. I get a lot of women throw themselves at me. They are a sucker for abs and a good jawline."

As of now, the fitness model, McIntosh is single after multiple of affairs and relationship with numerous ladies.

In 2016, McIntosh mocked two Orthodox Jewish women for looking butchered underneath their wigs which they have to war after getting married as per the Jewish law. He posted a status for those women on his Facebook account,

‘’ Just checking out these 2 orthodox Jewish woman on the plane both have just removed their wigs to reveal short hair as if butchered off with a rusty spade! Does anyone know what the point in this is? With those bald heads and the way they are dressed they look like a pair of witches from Roald Dahls “Witches” gonna seriously scare kids or grown ups like me. In fact I’ve got it they don’t want outsiders mixing with their woman! And the trick 110% works. Damn those guys are smart.”

After passing such harsh comments, he was criticized by many of the Facebook users and in the return of it he protested:

“How is what I said racist lol! I’m Asking a question plus the woman in particular did look like genuine characters from witches.’’

David McIntosh, 32, has the height of 6 feet (1.84m). McIntosh who started his career as a military has an estimated net worth of $2 million. However, the exact amount is not yet confirmed.

In 2014, he participated in Celebrity Big Brother, where he earned $240k as per his contract. The music video, Anaconda. He appeared as a model sold more than 1.3 million copies in the US and also received double platinum. The fitness freak owned Harley Davidson worth $1 million. He also owns Bentley Continental GT costing over millions.

David McIntosh claimed that he was married to Justin Bakos. But their relationship did not last long and divorced.

Logan Phoenix McIntosh is the only child of David McIntosh and Rachel Christine. Currently, the child is living with his mom.