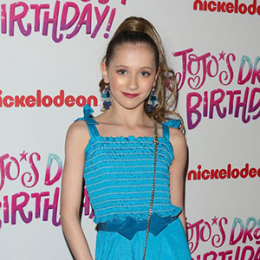 Elliana Walmsley is a dancer by profession. She started dancing from the tender age of 18-month-old and is still active in the same field. Moreover, she is making a good net worth from her profession.

Elliana Walmsley is a dancer who is very hardworking and ambitious which might be the reason behind her focusing more on her career. She spends most of her time in rehearsing the dance steps.

To add more to her personal life, Walmsley is a family person. She often spends her spare time with her mother. She is also close to her friends. Some of her good friends are Areana Lopez and Alex Oladi.

What a night! Seeing @jlo in concert with @ellianawalmsley_ was a memory to cherish.

The star further loves going to school. She spends most of her time in her car by doing homework. She is one of the bright students of the school.

Without any doubt, the star is active on social media. Her Instagram account contains more than 837k followers as of 2019.

Elliana Walmsley's major source of income is her dancing and acting career from where she makes a huge net worth and salary. Her net worth is around $200 Thousand as of 2019.

When it comes to dancing, Walmsley participated in numbers of dance competitions and own some of them as well. She came third in the Dance Moms after Kalani Hilliker and Brynn Rumfallo. Later, she participated in the first series of Dancing with the Stars: Juniors. Moreover, the contestant of the show earns $125,000 just for signing and participating on the show.

The young dancer also makes a good amount from her social media. Walmsley has many projects in her hand from which we can see a rise in her net worth.

Elliana Walmsley was born on 23rd June 2007 in Colorado under the birth sign Cancer. The star holds American citizenship and is of White ethnicity. Her mother Yolanda Walmsley raised her with two siblings, two brothers Luke and Jakeob.

Walmsley started dancing from the early age of 18 months. She then participated in dance competitions and won several regional and national titles. She even won several The Dance Awards.