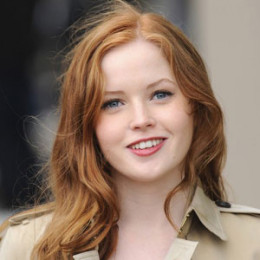 Ellie Bamber is an English actress and a model who is mostly known for her role as Jenny in Sir Trevor Nunn's movies "Aspects of Love." Bamber acted in "Pride and Prejudice and Zombies" along with Lily James and Matt Smith. She is also the member of the London Player's Theatre Company.

Ellie was born on 2 February 1997 in England. She and her younger brother, Lucas grew up in England with her parents.

Ellie joined Eagle House School and completed her high school level. She was awarded Drama scholarships at Wellington College. Although she was a strong academic student, she left her education at her early age to pursue her career in acting.

Ellie Bamber started her career from her earliest school days as she became the youngest member of the London Player's Theatre Company. When she was at the age of 13, she was chosen to play the role of young Jenny in the production "Aspects of Love" at the Menier Chocolate Factory.

She appeared in musical theater as well. The 20-year-old Bamber played the lead in High Society at The Old Vic, London, a musical directed by Maria Friedman She was nominated for the ‘Evening Standard Theatre Award’ for ‘Best Newcomer in a Musical’ in November 2015.

Ellie made her TV debuted in 2012 in the ITV two-part "A mother's son" where she played her role along with Martin Clunes and Hermoine Norris. She starred as Lydia Bennett in "Pride and Prejudice and Zombies" along with Lily James, Sam Riley, and Matt Smith.

Recently in 2017, she appeared in the music video for the song there in nothing holdin' me back by Shawn Mendes.

Ellie Bamber has kept her personal life secret. No rumors of her alleged boyfriend have made it up to the media. The rising star seems to be concerned about her career rather than being involved in an affair.

The talented and gorgeous actress, Bamber is working hard to achieve more in her career. Her net worth is not revealed yet, but as she appeared in many plays and TV shows, she must have a decent earning.