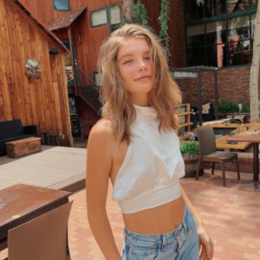 Ellie Thumann is an American YouTube star best known for running a beauty and a vlogging channel. Her contents comprise videos such as lifestyle, beauty, fashion, shopping, and travel. She was represented by the elite IMG Models Worldwide since 2019.

Ellie Thumann, a 19-year-old model has not been rumoured of dating anyone at the moment. However, she was dragged under speculation in March 2019 while she was spotted sharing a drink with a fellow YouTube star Mario Selman. 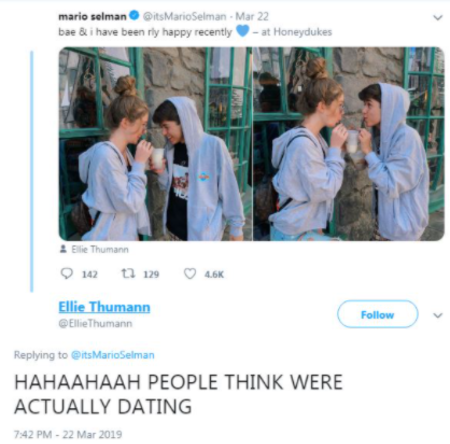 Selman has over 1.5 million followers on Instagram and 544k subscribers on his self-titled YouTube channel, where he uploads videos regarding his daily lifestyle. Thumann and Mario weren't actually kindling romance but all was for fun when Ellie assured there is nothing lovey-dovey going between the two. 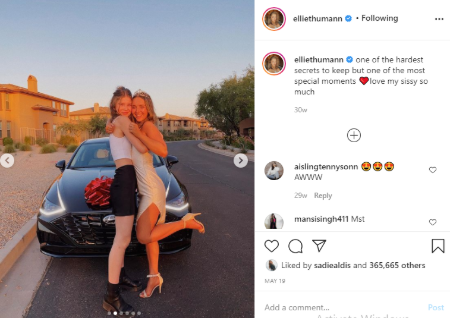 In the tweet shared by Mario, Ellie and Mario seemed cosy and wore similar grey hoodies having a drink in a glass. At the same time, Selman confirmed he is in a relationship with Instagram star Arii, who's amassed over 2.6 million followers on Instagram.

As of 2020, Thumann's relationship status is obscure. Nonetheless, she's managed to keep her love life in the shadows or focusing on her career and studies. Whatever the reason be, Ellie would soon reveal the love of her life on social media.

Thumann started her modelling career at age 18. She modelled for The Agency Arizona at a young age. At the time she signed a contract with a reputed modelling agency Next Model Management.

She is represented by the very popular IMG Models Worldwide since 2019. In addition to that, Thumann modelled for many fashion brands and posed for renowned clothing and show brands including Zara and Nike. 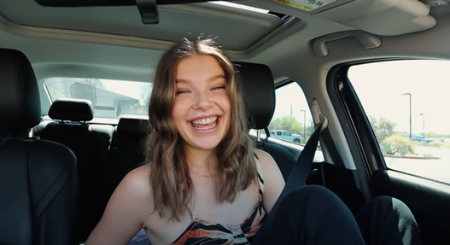 Ellie Thumann launched her YouTube channel on 3 March 2014 with the first video titled "10 Facts About Me". Thumann frequently features her sister Erin in a "Sister Tag" and "Bean Boozled Challenge" video. Even more, her brother Will appeared in a video titled "my brother turns me into a garner... Minecraft baby".

The Phoenix, Arizona-born star has amassed over 2.11 million subscribers and 116,722,274 views on YouTube. She is friends with a fellow YouTuber Emma Chamberlain. She is a lifestyle blogger whose YouTubechannel earned over 9 million subscribers through lookbooks, DIYs, hauls, and more.

Ellie Thumann owns a clothing Merchandise, Depopdepop, and drives a lavish Mazda 3 car. The internet sensation has once featured her car in a YouTube video. The car costs approximately $24,200 to $25,200.

Keep coming back to Marriediwiki.com for more biographies.