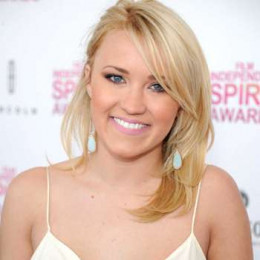 Emily Jordan Osment is an American singer, songwriter and also an actress. She has been working on several television films since her childhood. She is the daughter of Michael Eugene Osment and Theresa. Her father is an actor and her mother is an English teacher. She had worked in a popular television series named Hanna Montana. She has also learned to play many instruments buts her favorite is a guitar.

Emily has not married yet but she has dated many guys of the industry. But recently she is single.

Emily Osment has been dating Yvette Gonzalez-Nacer for over a couple of months now. Nacer appeared in Osment's socials since April 2019.

Osment dated a number of men in her life. Firstly, she's dated actor Frankie J. Allison in 2002 and broke up in 2004. She dated him for two years.

Subsequently, she had dated Daryl Sabara. Moreover, she had an affair with Cody Linley from 2005 to 2007. Unfortunately, her affair with Linley also could not last long.

In the same vein, she was romantically linked up with Mitchel Muss and Tony Oller in late 2000s. Except for them, she's been in a relationship with Nathan Keyes and Jimmy Tatro.

Recently, she's linked up with Jim Gilbert. Some sources claims, Cody and Jim are relishing their love life and living blissfully.

Emily Osment has an estimated net worth of $3 million. Her most recent work includes American drama, Almost Family.  She receives a salary of $35-$75,000 per episode for starring in TV series.

The Los Angeles native featured in a number of movies to date. She earns $50,000 to $150,000 per movie. Like many other celebrities, she generates thousands of dollars from ads and endorsements.

Osment agreed to sign with CosmoGIRL! shirts for the president of an online charity auction. In 2007, she designed a line of shirts for 2lovecollection.com. Its proceeds go to the Make-A-Wish Foundation and St. Jude Research Hospital.

She is a Global Ambassador for STOMP Out Bullying, the elite national Anti-Bullying.Cyberbullying organization in the nation for kids and teens.