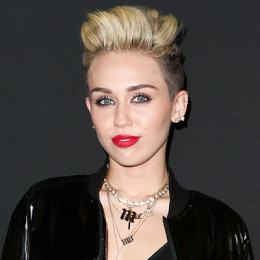 A very famous American singer, songwriter and an actress who rose into fame as Hannah Montana is non-other than Miley Cyrus. She has won several of the Awards and toured a lot. She had twenty-nine Billboard Hot 100 entries as of November 2009 for which she got the record of the "Most Charted Teenager" Guinness World Records in 2011.

The 26-year-old American singer-songwriter is probably single at the moment. In the past few days, she was blissfully married to American actor Liam Hemsworth. They lived in a marital relationship for less than a year.

The noble celebrity couple who're engaged in May 2012 and rekindled the relationship in October 2016 has recently announced their split through social media. Miley Cyrus and her now ex-husband decided to split up after eight months of marriage. People claims, the two parted ways in a mutual agreement.

Mute me if you don’t want SPAMMED

Rumors of a split between Cyrus and Hemsworth swirled on 10th August 2019, after the "Mother's Daughter" singer shared a photo of herself on Instagram in which she was not wearing an engagement ring.  Miley captioned "Mute me if you don't want SPAMMED,".

Miley Cyrus is happily married to her boyfriend turned husband, Liam Hemsworth on December 23 in a private wedding ceremony in their home in Nashville, Tennessee. Before marriage, the couple has on and off relationship from 2009-2012.

She was pulled in the controversy of her singles "We can't Stop" and "Wrecking Ball". Once, she was rumored to be pregnant and also dead due to a drug overdose.

Miley Cyrus holds a net worth of $200 million in 2017 and as of  2019 it surely rises. She earns $60 million from her first tour, the Best of Both Worlds, a Hannah Montana and Miley Cyrus joint tour. Cyrus is widely popular on social networking sites like Instagram, and Twitter.  She earns $192,825 - $321,375 per ads post for amassing over 97 million followers on Instagram.

Miley Cyrus was born on November 23, 1992, in Franklin, Tennessee, the U.S. She was born to a father who is a famous country singer Billy Ray Cyrus and mother Trish Cyrus.

Stay updated with Marriedwiki.com for more celebs news and entertainment.