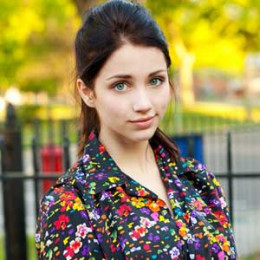 An actor, model, and internet personality, Emily Rudd is known for the movie, Sea Change from 2016. She is recognized on the internet by the username, emilysteaparty. She is dating someone but has kept his name a secret. The gorgeous, Emily got a chance to work with many prestigious photographers.

Emily was born on 24th February 1993 in Saint Paul, Minnesota. She grew up along with her older brother, Dan.

michelin madam baby me having her first bday, easily confused for very poised potato with hair

Emily is a citizen of America and is of white ethnicity. At her early age, she used to live in Minnesota and now she is the residence of Wisconsin. Emily used to play Karate during her childhood.

She attended Saint Paul School and graduated with a degree in theater.

From an early age, she had a keen interest in modeling and started in her hometown.  She shifted her career from modeling to acting right after her graduation.

Her first break was from a music video for I Had This Thing where she worked as a model with Eman Bittencourt. During the same year, she also worked in another music video of 3LAU ( is a DJ and electronic dance music producer).

Moreover, she also acted in the thriller film, Eye for an Eye: A Séance in VR which was directed by Elia Petridis. She also did small roles in movies like Secret Santa and Best Guys.

Besides acting and modeling, Emily also posted videos on YouTube. Her makeup tutorials and other videos grabbed thousands of viewers. Emily got a chance to work with various renowned photographers like- Sara Kiesling, Jared Kock, and Peter James.

As per her Instagram photos, she in relation with a guy named Justin Blau aka 3LAU. He is a rising American DJ and an electronic dance music producer.

happy birthday to my fav

Maybe she wants to stay away from controversies, so has not opened up about her boyfriend's name and profession in front of the media.

The couple is having a great time together and seems to have a deep bond as per the photos posted.

i'm as surprised he's still with me as he looks in this photo. happy anniversary

The two have been together since 2015 and still, they are going so strong in their romance.

Emily might have an estimated net worth in 6 digits as her videos on YouTube has earned a lot of views.

Apart from that her successful modeling career and appearances in series and movies also pay up well. Rudd has a great fan following in the social networking sites. She has 588k followers on Instagram and 32.9k followers on Twitter as of December 2018.