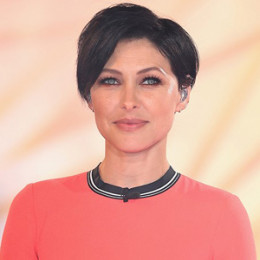 Emma Willis aka Emma Louise Willis is a British television presenter and a former model. She is best known for her work in the UK networks such as Channe 5, ITV, BBC and Heart FM. She is married and has three children.

Emma Willis was born on March 18, 1976, in Birmingham, England. As far as her ethnicity is concerned she belongs to White American and holds the American nationality.

Willis is the daughter of Cathy Griffiths and Steve Griffiths. She has a sister named Rebecca and Sharon with whom she grew up in Sutton Coldfield. She attended John Willmott School at Sutton Coldfield and completed her graduation from there.

Willis started her modeling career at the age of 17. She worked for different companies including Elle, GAP, Vogue, Chanel and Marie Claire.

Willis got her first break on the MTV as a presenter in 2002. She hosted numerous shows including guest-hosting shows like Loose Women, and This Morning and CD: UK. In the year 2007, she presented ITV2's spin-off series, I’m a Celebrity…Get Me Out of Here! NOW! Series along with her husband Matt.

Willis hosted two series of the ITV2 British reality television show Girlfriends in 2012 and 2013. She then appeared on BBC One talent show, The Voice UK replacing Holly Willoughby. In 2013, she co-presented the ITV game show entitled Prize Island alongside Alexander Armstrong.

In 2010, it was announced that Willis would replace Melinda Messenger on the Channel 5 series, Live From Studio Five. After two months she announced that she would be returning to present Big Brother’s Bit on the side.

Willis co-presented the third series of The Voice UK alongside JLS Singer Marvin Humes. In 2015, she became the celebrity ambassador for Gillette Venus, a shaving product, and Oral-B.

Emma Willis, 41, is a married woman. She married her longtime boyfriend, Busted singer, Matt Willis at the Rushton Hall, Northamptonshire.

The couple first met in 2005 and started dating. Her husband, Matt proposed Emma for on Venice's Rialto Bridge. The wedding took place just after 15 months of her proposal.

The couple is blessed with three children, two sons, and a daughter. She gave birth to her first child, a daughter named Isabelle Catherine Willis in June 2009. Her husband Matt was an alcohol addict but was changed after the birth of Isabelle, first daughter.

Willis is living a lavish life with her husband and children. She has earned an astonishing amount of money from her work. She has maintained the net worth of $3 million.

Emma Willis married her longtime boyfriend, Matt Willis in 2008 at the Rushton Hall. Her husband Matt is an English singer, songwriter as well as a popular actor.

Emma Willis and her husband were blessed with their first child in 2009. The baby girl was named Isabelle Catherine Willis.

The proficient television presenter, Emma and her husband, Matt were blessed with a baby boy named Ace Billy in 2011. He was the one and only son of the couple.

Matt and Emma were blessed with a baby girl recently in 2016. She is the second daughter of the couple.