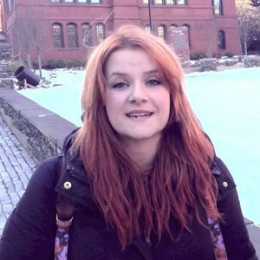 The American podcast anchor, artist, and comedian, Erin McGathy, 31, first rose to fame as the host of This Feels Terrible. She later went on to become co-host Human Conversation along with Wayne Federman and the "comptroller" of the Harmontown podcast. In the year 2007, her career began in acting by performing at the Upright Citizens Brigade and her solo show This Feels Terrible aired at the theater after three years.

Erin McGathy was born on December 5, 1985, in Japan. She is the daughter of a preacher. As far as her nationality is concerned, Erin is of Japanese nationality and her ethnicity is Asian. She began improvisational comedy in high school.

Erin McGathy started her acting career by performing at the Upright Citizen’s Brigade Theatre in the year 2007. After three years, her solo show This Feels Terrible, aired at UCB. The show later changed as a podcast.

After that, Erin took an interview with several comedian stars including Marc Maron, Dan Harmon, Wayne Federman, and director Rob Schrab as well. Moreover, she became a recurring guest and comptroller on the Hermantown podcast. She was a frequent character on the show's segment Dungeons & Dragons.

Erin McGathy was married to her boyfriend Dan Harmon. Her former husband Dan, 43, is an American writer, producer, and voice actor as well.

The couple tied the knot in November 2014 at Los Angeles Natural History Museum. Erin and Dam were dating openly for a pretty long time, before getting married. A disheartening report came that the pair divorced, nearly after a year of their marriage.

Following their divorce, Erin McGathy made a public statement on her Twitter on October 11, 2015, it reads

“People may say getting a divorce is an extreme measure for rebooting a podcast, but I'd ask if they heard my interview w/ Rachael Leigh Cook”

She is currently living a single life. Her ex-husband is now in a relationship with Cody Heller.

This Feels Terrible star, Erin McGathy, has made a handsome amount of money from her creative career. Even though her exact figure of net worth isn’t public, her net worth is most likely more than $1 million.