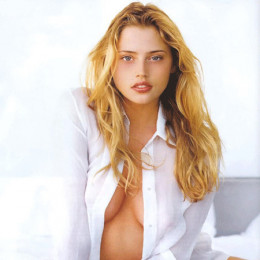 Estella Dawn Warren, an actress, fashion model, and a world-class synchronized swimmer is well known for starring in the film Planet of the Apes. As a National swimmer, she won 3 national titles. She has been modeling since 1994 and has appeared in Sports Illustrated, Vanity Fair, Vogue, and Victoria's Secret.

Does Estella Warren Have a Boyfriend?

The current relationship status of Estella Warren is possibly single at the moment. Previously, she dated Michael Burns, American TV, and film actor. However, they broke up later.

Then, she was in a romantic relationship with Paul Thomas Anderson in 2001. She also dated an actor, Kevin Ian Pardue aka Kip Pardue and actor, Jerry O'Connell. Warren and Pardue remained girlfriend-boyfriend for a year until they broke up in 2002 cause of irreconcilable differences.

What is Estella Warren Net Worth?

Estella Warren holds an estimated net worth of $1 million in December 2019. The 5 ft 9 inches tall actress made a huge fortune from her career as an actress and model. She bagged $35-$100 thousand per hour for her job as an actress. She's collected big bucks from ads and endorsements as well.

Midst swimming career, she was a member of the Canada national team and won three national titles. Further, she has been modeling through publications like Sports Illustrated. She serviced for campaigns for promoting brands like Perry Ellis and Victoria's Secret.

Warren began her movie career in 2001 starring in Driven. Since then, she got an opportunity to feature in movies and TV series one after another till 2017. Her latest on-screen work was Tv series "Age of the Living Dead" as Michelle in 2017.

Back on May 24, 2011, Estella was arrested in Los Angeles after she hit three parked cars with her Toyota Prius and then fled the scene. Moreover, Police eventually found her and charged for driving under the influence of alcohol (DUI). Her bail was set at $100,000. As the actress entered a no-contest plea to the drunken driving charge, and the rest of the other charges dropped, she was sent to a residential rehab center for four months.

Estella Dawn Warren was born on December 23, 1978, in Peterborough, Ontario, Canada. She is the daughter of Esther and Don Warren. Her father is a used-car dealer and mother is an elementary school headmistress. Estella is the youngest of three daughters.

Estella,40, holds Canadian nationality and belongs to white ethnicity. She started her modeling career in 1994. She is the daughter of Esther and Don Warren. Estella was named one of FHM's 100 Sexiest Women in the World in 2005. Most recently, she resides in her house located in Los Angeles, California, U.S.