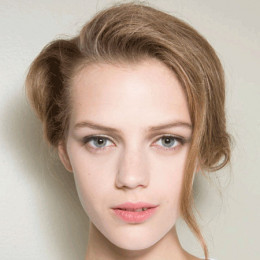 A German supermodel who is currently signed with Next Model Management. She was just 15 years old when she was discovered by scout of the model agency Model factory. She made her debut in 2012 through Christian Dior couture show in Paris. She was featured in cover of D magazine for cover three times. In 2013 she took part in international fashion weeks in New York as runway model held in Milan and Paris. She has already worked in the advertisement campaign of popular brands like Prada, Chanel, Calvin Klein, Loewe, Isabel Marant, Roland Mouret, Lanvin, Dries Van Noten, Valentino, Celine, Miu Miu, Chloé, Dolce & Gabbana, Sonia Rykiel, Salvatore Ferragamo, Emilio Pucci and so on. She was ranked in 35th position in the list of Top 50 Models worldwide by "models.com".

Exploring her personal life she hasn't married yet. There is no mention of any kind of relationship of her in internet. Nor she has revealed any information regarding her relationship status. It seems like currently she is single because we know the power of media, if she was in relationship it would have been public by now. May be she is trying to reach in the top list of Top 50 Models worldwide for which she has been focusing more on her career rather than worrying about her love life.