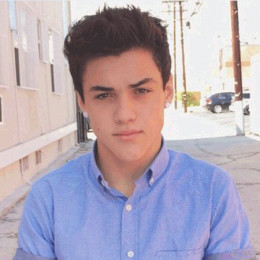 An American talent of Star Quest 2014 who is very popular for his videos in the social media platform, Vine alongside his twin brother Grayson Dolan. Till now he has more than 700,000 followers on Vine. He is an avid fan of wrestling and he himself is a competitive wrestler and have competed on a tournament in Madison Square Garden. He has already worked in collaboration with Vine stars such as Amanda Cerny, Jack Dail, Kenny Holland and so on.

Exploring his personal life, he has not married yet. There is no record of him having girlfriend. It seems like he doesn't want to flash his relationship in media or may be he hasn't found right girl for him. Since he has not married yet there is no question of facing divorce. He is regular user of social media app Twitter where he frequently shares his thought to his fan. His fan can follow him in his official twitter account @EthanDolan to get more updates on him.