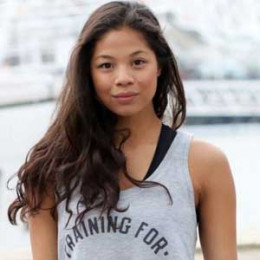 Eva Maria Noblezada, a native of San Diego was born on 18th March 1996. She holds American nationality and belongs to white ethnicity.

Noblezada attended Northwest School of Arts in Charlotte. From the very early age, she was interested in acting so performed in Cinderella by Cameron Mackintosh, a British Theatre producer, when she was only 6. And during her high school, she competed in the National High School Music Theatre.

Eva professionally began her career in acting in theater from the age of 17. In 2014, she made a debut in stage shows in the London revival of the musical, Miss Saigon with the lead role of Kim at the Prince Edward Theatre. Her starred movie included Footloose, Godspell and West Side Story.

Furthermore, she appeared as a young Eponine in the West End's Les Miserables. Currently, in 2017, she is working in the Broadway revival of Miss Saigon along with Jon Jon Briones and Alistair Brammer.

Eva Noblezada is in relation with Leo Roberts, an actor. However, they are in a long distance relationship. Till today they are together, and no rumors of their breakup have surfaced yet.

The couple seems to share a strong bond which can be seen in some of the pictures posted on Instagram.

Miss Saigon star, Eva is living a ravishing life as she posted many photos of her travel and attending various functions wearing designer clothes and expensive jewelry.