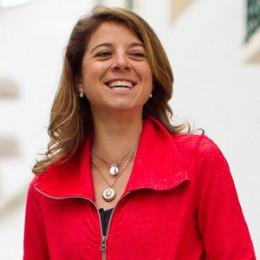 Evelyn Stevens is a retired American road cyclist most recognized for her continuous effort and hard work during numerous competitions. She is now a married woman and is living a happy life with her husband.

Evelyn Stevens was born on May 9, 1983, in Claremont, California whereas was raised in Acton, Massachusetts. She is the youngest of five children.

Stevens went to Acton-Boxborough Regional High School. She graduated from Dartmouth College, New Hampshire in government and women and gender studies. She used to play tennis while in Dartmouth.

Stevens is a retired professional road cyclist. She worked for Lehman Brothers and mezzanine fund, Gleacher Mezzanine before taking up cycling as her primary profession in 2009. She took part and won the several competitions throughout her career journey. She is also the member of Cycling's National Development program.

Evelyn is a well-accomplished cyclist who won back-to-back U.S National Time Trial Champion in 2010 and 2011. She acquired the 24th position in 2012 Summer Olympics in the Women’s road race. The same year Evelyn won La Fleche Wallonne Feminine. She also rode the HTC Highroad Women along with Germany's Judith Arndt.

In 2016, Stevens rode a distance of 47.980 k.m. at the current UCI Hour record for women, the Olympic Training Center Velodrome in Colorado, United States. She cycled 1.1 km breaking the record set by Australian Bridie O’Donnell in Adelaide. In 2016 she became one of the only two women who won gold medals in the women's team time trial at the UCI Road World Championships – thrice with Team Specialized–lululemon and once with Boels-Dolmans.

Evelyn married Brett Baker in 2015. The duo first met in 2006 at a group dinner in New York. However, they got to know each other properly in 2013 at their mutual friend Joseph Decastro's wedding. The couple was so into each other that they started going out and soon made their relationship official the same year.

After dating for more than a year, the lovebirds got engaged in October 2014. Her husband Brett romantically proposed Evelyn at her parents’ home in Cape Cod. The husband and wife are leading a blissful and contented married life now. They don't have any children yet but soon they may start a family.

As an incredible former cyclist, Stevens earns a lucrative amount from her career. Her estimated net worth is $2 million.

Brett Baker is the handsome husband of Evelyn Stevens. The duo tied the knot after dating for a year in 2015.