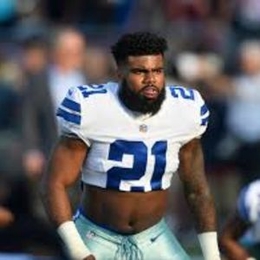 Ezekiel Elliot is an American football running back for the Dallas Cowboys of the NFL. Today, he is counted as one of the most explosive players who has already become the face of the legendary Dallas Cowboys franchise.

News has been swirling, Ezekiel Elliot and girlfriend Halle Woodard walked down the aisle. However, the official news is yet to break out. Ezekiel's mother Dawn Elliot took two photographs of Woodard on November 24, 2018, to celebrate her birthday. Miss Elliott loves and refers to Woodard as her own daughter. 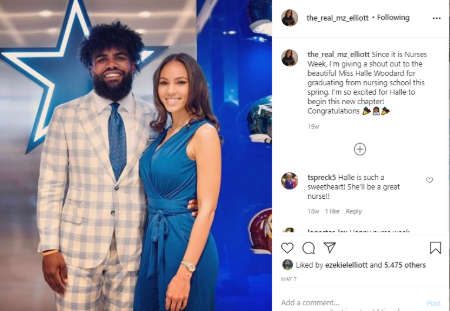 At the moment, Dawn concluded by saying she wishes to capture more pictures of Halle. Meanwhile, Ezekiel commented with two blue hearts on her mother's post. In addition to that, Halle's father also expressed his love in the comment section.

Well, needless to say, Ezekiel and Halle faced tough times in May when the NFL star was arrested for involving in a fight with a safety officer at the Electric Daisy Festival. The pair had an argument prior to that and they decided to take a break from the relationship. They even unfollowed each other on Instagram. 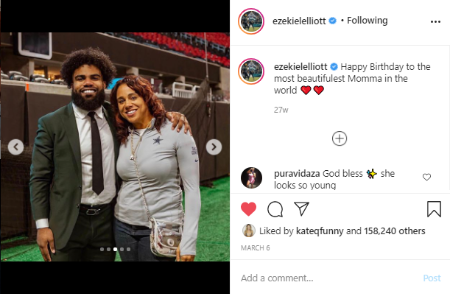 Regardless of all, Ezekiel and Woodard reconciled in September 2019 and fans guessed that they are soon getting engaged after Dawn Elliot's Instagram post. The Dallas Cowboys star and Iowa native have been together for more than four years now,

How Much Is Ezekiel Elliot's Net Worth?

Ezekiel Elliot touched the bar and became the highest-paid running back in NFL history agreeing to a $90 million six years contract with Dallas Cowboys. Elliot is the first Cowboy star to cover $100 million.

In September 2019, the NFL running champion was signed for $90 million contracts for six years in September 2019 with a whopping $50 million guaranteed added on two years remaining on his rookie deal.

Till today's date, Elliot set a Cowboys rookie record with 1,631 yards that led the league and 15 touchdowns in 15 games. He led the league in yards per game during 2017 however missed out on the rushing title due to a six-game suspension for violating the NFL's personal conduct policy.

Elliot was born on 22 July 1995 in Alton, Illinois, a small town with a population of fewer than 30,000 people. Son of Dawn Elliot, Elliot had a passion for football from an early age.

During high school, he led his team to three straight state championships. He was champion in basketball and other athletics as well. Ezekiel was named the Gatorade Track Athlete of the year for Missouri.