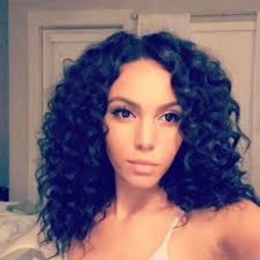 While Halle Woodard manages to keep her personal life low key, the running back for Dallas Cowboys didn't lag behind to showcase his big emotions on the field when it comes to his love life. In case it wasn't for the NFL star's mom, Dawn Elliott, Ezekiel's fans wouldn't even know there is someone special in his life.

Halle Woodard started dating Ezekiel Elliott in 2016. Elliot's fans have been speculating if he and Halle have walked down the aisle. However, the official news is yet to be confirmed. Fans guessed if Ezekiel and Halle are soon getting engaged after Dawn Elliott's Instagram post after the two reunited in September 2019. 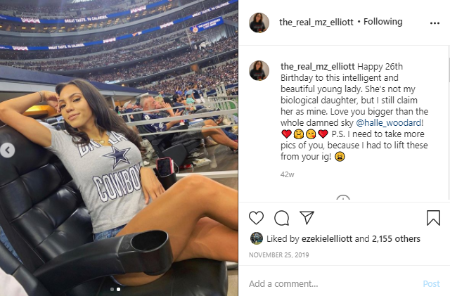 The running back's mother Dawn Elliott took two photographs of Woodard on November 24, 2019, to celebrate her birthday because she considers Halle as her own daughter. Meanwhile, Mrs. Dawn concluded the post by saying she wants to capture more pictures of her daughter in law.

At the same time, Ezekiel commented on the post with two blue hearts on his mother's post. That's not all, even Halle Woodard's dad expressed his love in the comment section. 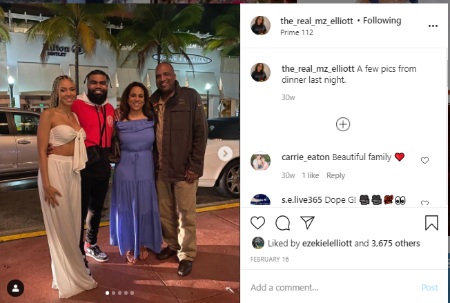 Halle and Elliott went through tough times in May when the NFL star was caught for involving in a fight with a safety officer at the Electric Daisy Festival. They had an argument before that and also decided to split. The lovebirds who unfollowed each other on Instagram later reunited in September 2019.

Woodard possesses a decent amount of net worth. Her primary source of income is her career as a nurse. She does a part-time job as a bartender at a bar and lounge called Citizen Dallas by night. According to her bio provided on Instagram, Woodard works as a trainer ay Body Machine Fitness. It shows the black beauty has a contribution to many fields.

Halle's partner Ezekiel Elliot has a net worth of $12 million and receives a salary of $5 million. Back in 2016, he has signed a four-year rookie contract for $24.9 million with a signing bonus of $16.3 million. Today, Ezekiel has crossed the bar and became the highest-paid running back in NFL history. He is the first Cowboy player to set $100 million.

Halle Woodard was born on November 24, 1992, to Patricia Simpson, under the birth sign Sagittarius. The 25-year-old spent her childhood in Dallas, Texas. She stands at a height of 5 feet 6 inches and weighs 143 lbs. Halle studied at J.J Pearce High School and was a member of the Track & Field Team. In 2013, she graduated with a nursing degree from Iowa State University.