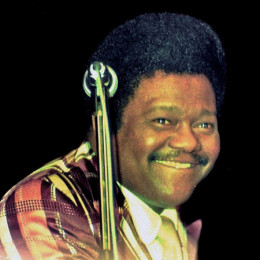 An American pianist and singer-songwriter who is better known as Rock 'n' roller and rhythm and blues artist who found his thrill on Blueberry Hill. Before 1995 he has already released five gold records. He is of French Creole background. Since his father was a well-known violinist, he was highly inspired by his father to pursue his career in music industry. He was discovered by popular New Orleans bandleader named Billy Diamond. With the release of "The Fat Man" in 1950 on Imperial Records he gained national attention. He recorded impressive 37 different Top 40 hits for the imperial Records and left the label in 1963.In 1986 he was inducted to the Rock and Roll Hall of Fame.

Fats Domino was born  Antoine Domino Jr. on February 26, 1928, in New Orleans, Louisiana, U.S. He was the youngest of eight children born to Antoine Caliste Domino and Marie-Donatille Gross. His father was a part-time violin player who worked at a racetrack. His family was of French Creole background.

Domino attended the Louis B. Macarty School until the fourth grade. In 1938, he learned to play the piano.

Domino started his music career at the age of 14, he used to perform in New Orleans bars. His bar owner named him Fats because Domino reminds him of the renowned pianists' Fats Waller and Fats Pichon, but also because of his large appetite.

Domino had an estimated net worth of about $8 million.

Domino lived was married to his wife Rosemary Hall for 60 years. They were living together until her unfortunate death in 2008.

The couple tied the knot in 1948 and have eight children together.

The rumor of his death was all over the news due to mighty Hurricane Katrina in 2005 along with his wife because he couldn’t leave his home because of his wife's poor health. Fortunately, he was saved by a coast guard.

Talking about his personal life, he was a happily married man. He loved his wife so much but sadly she died due to her poor health in the year 2008.

Domino died on 24 October 2017 at his residence in Harvey, Louisiana at 89 years of age.

He used to love her very much. They were together in their old neighborhood in Louisiana when the devastating Katrina hurricane occurred. She died in 2008 due to her poor health.

He is the eldest son of the family.

She is the second child of the family. She is gorgeous.

He is very handsome guy and he is following his dads footstep in music.

She is currently residing in New Orleans.

She is youngest among the daughters.

His picture along with his dad can be found in different sites.

He is the youngest among his siblings.