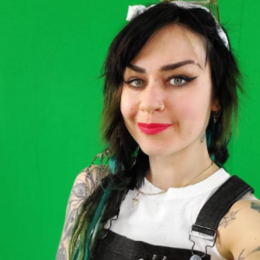 Faye Hadley is a television personality who is best known as co-host of All Girls Garage and co-founder of Woman and Machine. She empowers women to carry out workshops focusing on buying and selling cars, doing useful repairs, and maintenance tips.

Who is Faye Hadley Married to?

TV host Faye Hadley is a married woman who tied the knot with her husband, Brandon Hadley on 25 September 2016. Faye and Brandon were best friends before taking the relationship to the next level. 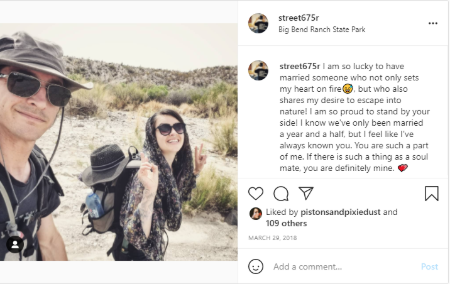 Faye Hadley and Brandon Hadley have been married for five years. SOURCE: Instagram

The couple started dating in late 2015 and eventually walked down the aisle one year later. Brandon proposed his lady love on the occasion of her birthday. As for Brandon Hadley, he is a wood artist and carpenter by profession.

Further, Hadley and her beloved husband also share numerous pictures on their Instagram page. But, in the meantime, the couple doesn't have a child yet and living happily together without bearing the responsibilities of children. Undoubtedly, the number of Instagram posts is proof of their amazing relationship.

Faye Hadley is widely popular as the owner of Piston & PixieDust. Likewise, she is a cast member of All Girls Garage, a female-oriented television show where women are involved in the automobile repairing industry. 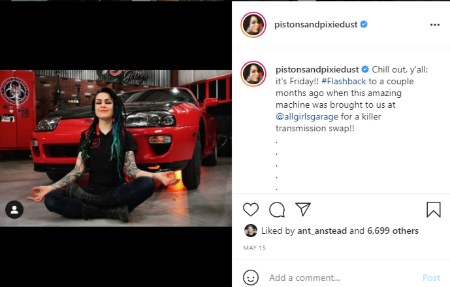 Faye Hadley is a cast member of All Girls Garage. SOURCE: Instagram

And, Hadley not only restores vehicles but also teaches and gives training to young students in her store. The first episode was aired on the 3rd March 2012 and the show went onto become popular. Needless to say, Hadley is famous in the world of automobiles.

Faye Hadley has summoned a staggering estimated net worth of over $250,000. She earns from her automobile industry and has established a repair store & Education Company, "Pixie & PixieDust."

In addition, she carries workshops for women focused on buying and selling cars, good repair and maintenance tips. She also previously had a job that involved testing engines, fuel, oil, and others.

Then, Faye Hadley started working as a mechanic when she had a problem with her broken engine car, a Volkswagen GTI, during her road trip in 2007. Faye had no money to repair it and eventually fixed the car on her own. After that, she started working as a therapist though, after getting a degree in Psychology.

However, she moved to Portland and got an unpaid internship at a garage where she learned more about the automobile. Faye also got a job at a Toyota dealership and got many certificates from them. She then worked in another garage which specialized in older vehicles. And, just like that, Hadley became a car repair pro.

Faye Hadley is happily married to Brandon Hadley since 2016. They have been together for five years. They have no children.